In our weekly predictions, only one person picked either team to break the 20-point barrier. We were right in that regard, but everybody picked Iowa to win. What went wrong for the Hawkeyes?

The problem starts offensively, specifically with the line. The same unit that won the Joe Moore Award last year as the best offensive line in the country has now struggled to create any push or open any holes in consecutive weeks. In the first three games of the year, Iowa averaged 165.3 yards rushing per contest. After mustering just 82 yards—35 of which came on one play—last week against Penn State, Iowa stuck with their identity against Michigan State. It didn’t work: 40 carries, 88 yards, an average of 2.2 per rush.

That’s the most concerning issue. Sure, the level of competition has gone up and two games is a relatively small sample size. But isn’t it troubling that a program that hangs its hat on the power run game seems like its stuck in the mud? We’ll find out for sure against Illinois, a team that ranks 91st in the country in rush yards allowed by surrendering 179.5 per game.

This might’ve been Nate Stanley’s roughest performance of his young career. He was wildly off-target a few times, and his deep-ball accuracy continues to be subpar. His fumble near the endzone in the third quarter hurt Iowa a lot. But Stanley is just a sophomore and has a lot to learn. It’s way too early to heap any hefty blame on him, but Stanley knows he will have to improve down the road.

With the offense struggling, the punting game becomes even more important. That area has been a letdown for the Hawkeyes this year. Colten Rastetter ranks 83rd nationally with an average of 39.7 yards per punt. There’s no official stat for this, but he has to rank even lower in “yards the ball travels in the air.” Rastetter has been the beneficiary of some favorable bounces, but opponents have learned to come up and catch the ball to take that away. Maybe it’s time to give freshman Ryan Gersonde a shot. Former Iowa Punter Ron Coluzzi agrees.

It’s not all negative though. Iowa’s defense continues to stifle opposing attacks. After a 16 tackle performance against Penn State that earned him Co-Big Ten Defensive Player of the Week, Josey Jewell again nabbed the ball-carrier 16 times, including three tackles for loss and half a sack. It’s never bad to have your defense anchored by maybe the best linebacker in the country. Even outside of Jewell, the Hawkeye D was stout. Michael Ojemudia got picked on, but that won’t happen as much when Manny Rugamba returns from a minor injury. Plus, it looks like Brandon Snyder is inching closer and closer to a return.

Against Illinois, it needs to be Iowa’s goal to rush for 200 yards. Use this as an opportunity to get Akrum Wadley’s confidence back up after two tough losses and one subpar performance. 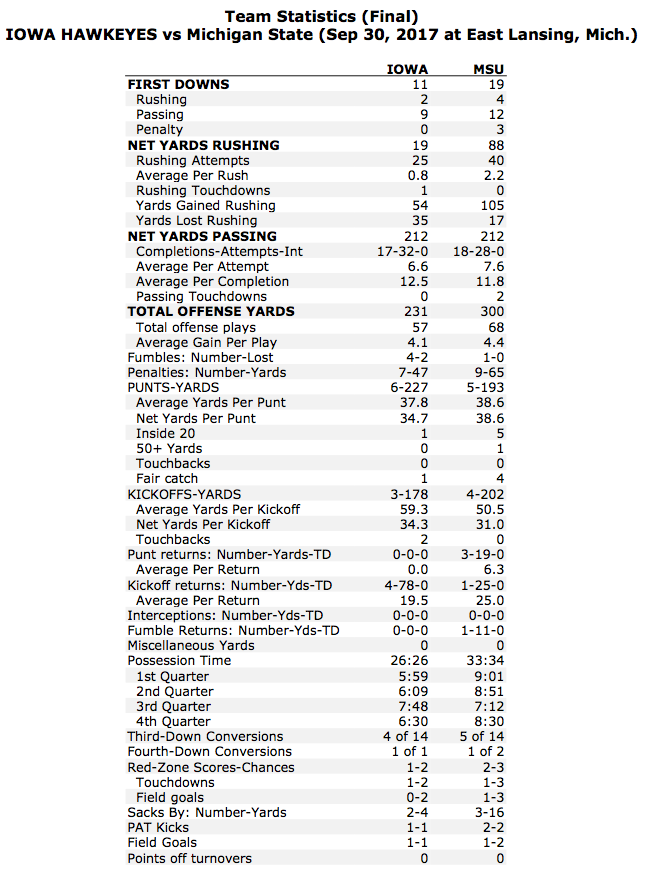 One thought on “Overtime: A Look Back at the Iowa Hawkeyes 17-10 Loss to Michigan State”