Iowa returns to Kinnick Stadium for the last time this season, hosting Big Ten West opponent Purdue. It’s also Senior Day in Iowa City. The Hawkeyes are 6-4, 3-4 – the Boilermakers are 4-6, 2-5 and have lost four of their last five games. Those losses, however, have only been by an average of 5.3 points – and Wisconsin, which dominated Iowa last week, barely squeaked by Purdue 17-9 in Madison on October 14. Purdue is 0-3 in B1G road games this year.

The Hawkeyes have defeated Wyoming, Iowa State, North Texas, Illinois, Minnesota, and Ohio State – while losing to Penn State, Michigan State, Northwestern, and Wisconsin. Three of Iowa’s losses (other than at Wisconsin) have come by one possession each and two of those came down to the last play of the game.

Kirk Ferentz is in his 19th season as Iowa Head Coach with a record of 141-96 at Iowa – and he’s still just two wins shy of tying Hayden Fry as Iowa’s all-time winningest head football coach. Both Ferentz and Fry rank in the top seven in the Big Ten both in terms of overall wins and conference victories. Ferentz is also currently the dean of college football coaches.

Jeff Brohm is in his first season at Purdue, bringing hope to Boilers Nation after his highly successful run at Western Kentucky. His record at Purdue is 4-6 but his overall record in four years as a head coach is 34-16.

Per Iowa Athletic Communications, since the start of the 2014 season the Hawkeyes with this group of seniors have won 33 games and qualified for a bowl game every year. The senior class has an overall record of 33-17, including a 20-7 mark at home and a 21-11 record in Big Ten games. The 21 conference wins are the fourth most by any senior class under Ferentz. The 2005 senior class won 25 Big Ten games, the 2004 senior class won 24, and the 2016 class won 23.

While Kirk (and Brian) Ferentz stress the goal of having a balanced offense – passing and rushing – one Offensive stat stands out. Since start of 2015 season, Iowa is 26-1 when rushing for 100 yards or more – but 0-10 when it is under 100 yards on the ground. Purdue is giving up an average of 139.4 rushing yards per game. Plus, it’s also the last home game for Iowa running backs Senior Akrum Wadley and Graduate Transfer James Butler – expect them to put forth some extra effort in their last game at Kinnick.

Purdue’s Defense has seen major improvement this season, compared to the past few years. It is also varied – sometimes running a 3-4 scheme, other times the more traditional 4-3, and it blitzes from both. The Boilermakers are fourth in the Big Ten in Scoring Defense, surrendering just 19.3 points per game – that’s one spot ahead of the Hawkeyes Defense which is giving up just 20.1 points per game. Last year Purdue’s opponents scored an average of 38.3 points per game. Additionally, the Boilers are allowing only 139.4 yards rushing per game, 3.7 yards per carry, and just nine rushing touchdowns – vs. last season when they gave up an average of 238.4 rushing yards on 5.25 yards per carry and 35 rushing TDs. That’s a stunning turnaround in Brohm’s first season in West Lafayette.

The Hawkeyes have tied a single season school record with four pick-sixes: 89 yards by Brandon Snyder vs. Illinois, 30 yards by Amani Hooker vs. Ohio State, and two by Joshua Jackson at Wisconsin (43 yards and 52 yards). The three previous seasons this occurred were 1995, 2010, and 2015.

The Iowa – Purdue Game will be televised by BTN with announcers Kevin Kugler, Matt Millen, and Lisa Byington. It will be broadcast on the Hawkeye Radio Network with announcers Gary Dolphin, Ed Podolack, and Rob Brooks – and it will also be available on satellite radio XM Channel 196 and Sirius Channel 135.

Iowa’s Depth Chart is largely unchanged from what it was for Wisconsin. SS Amani Hooker hasn’t practiced since the Ohio State Game and Ferentz indicated Tuesday that is highly unlikely he will play in the Purdue Game. That leaves former starter Miles Taylor as his replacement. Punter is still listed as “or” – either Ryan Gersonde or Colten Rastetter, who handled all of the punting duties in Madison last Saturday.

Purdue’s biggest loss is probably its starting quarterback David Blough. However, Blough’s backup Sophomore Elijah Sindelar has seen considerable playing time throughout the season. He started was last Saturday at Northwestern, completing 37 of 60 passes for 376 yards, two TDs, and one INT. Before his injury, Blough was fourth in the B1G and 17th nationally with a 65% completion percentage. Sindelar’s backup is also a wide receiver – Jared Sparks is a threat out of the Wildcat formation and was the main receiving target vs. the Wildcats, catching 11 passes for 130 yards.

Junior DB Josh Jackson leads the country in interceptions (7), interception return yards (163), and passes defended (23), and ranks third in passes broken up (16). He has five interceptions in the last two weeks, returning two of them for touchdowns against Wisconsin (43, 52), and is one interception from tying Iowa’s single-season record (Desmond King, 2015; Lou King, 1981; Nile Kinnick, 1939).  He has earned Big Ten Defensive Player of the Week the last two weeks.

QB Nate Stanley has 22 touchdown passes, second in the Big Ten and tied for 14th in the nation. He is the first Hawkeye to throw 20-plus touchdowns in a season since James Vandenberg threw 25 touchdowns in 2011. Chuck Long holds Iowa’s single-season TD record (27 in 1985).

LB Josey Jewell leads the Big Ten and ranks fourth in the nation with 11.6 tackles per game. He has 104 tackles this season, tops in the Big Ten and tied for fifth nationally. He needs 11 stops to tie Chad Greenway for fifth all-time (416) and become the third Hawkeye in program history to have three seasons with at least 115 tackles (Larry Station 83, 84, 85; Abdul Hodge 03, 04, 05).

Iowa’s senior linebacker trio is making its final home appearance. Josey Jewell (40), Ben Niemann (37), and Bo Bower (36) have combined for 113 starts. The have started 22 of the last 23 games together (Jewell missed NW game in Week 7).

Second-year tight ends Noah Fant (So.) and T.J. Hockenson (redshirt freshman) have combined for 43 receptions this season. Among those 43 receptions, all but six have resulted in a touchdown (10) or first down (27). Fant’s seven touchdowns are a single-season school record for a tight end.

Wisconsin clinched a berth in the Big Ten Championship Game plus a share of the West Division title with its win over Iowa last weekend. The Badgers can win the Division outright by beating Michigan this Saturday or by a Northwestern loss to Minnesota.

The East Division is led by Ohio State with its 6-1 record – Michigan, Michigan State, and Penn State are all one game behind at 5-2 in conference play. If the Buckeyes defeat Illinois this Saturday and Wisconsin beats Michigan it can clinch the East Division berth in the Championship Game.

Wisconsin’s 10-0 start this season is a school record and it is just one of five FBS teams that remain undefeated – yet as of this week it sits outside the four teams ranked for the playoffs.

Northwestern has won five straight B1G games for the first time since 1995-96 when it won 13 straight over those two seasons.

Iowa’s Josh Jackson tied a Big Ten record with his two pick-sixes at Wisconsin. He is just the third player in conference history to accomplish that feat. One of the other two – former Hawkeye B.J. Lowery did it in 2013 against Western Michigan.

Week 11 Results, including Iowa’s 38-14 drubbing at the hands of Wisconsin, included:

Week 12 Games, in addition to Iowa hosting Purdue, include:

Stats Smackdown: Iowa – Purdue is below. 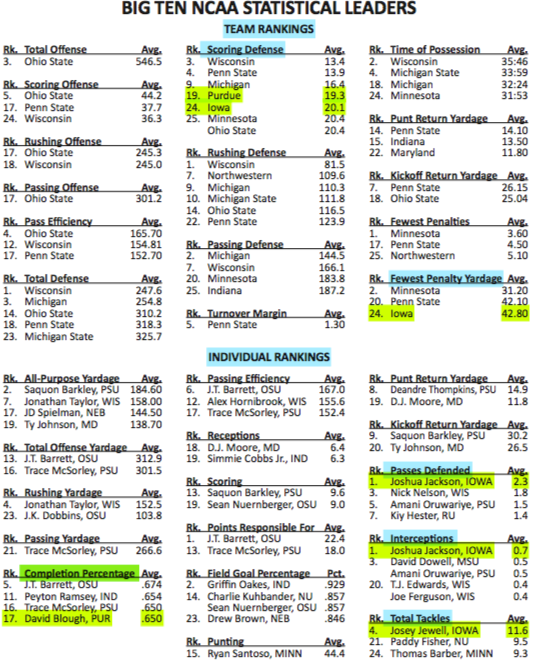