Iowa (3-1, 0-1) travels to East Lansing this Saturday afternoon to play Michigan State for the first time since the Hawkeyes lost to the Spartans 16-13 on the final drive in the 2015 Big Ten Championship Game.

Iowa’s lone loss came at the hands of Penn State 21-19 as time expired last Saturday evening at Kinnick Stadium. The Hawkeyes have defeated Wyoming and North Texas at home and Iowa State on the road.

Michigan State has played all three of its games at Spartan Stadium, defeating Bowling Green and Western Michigan and losing to Notre Dame 38-18 last Saturday. This will be MSU’s Big Ten Opener.

This may not be a “must-win” game for Iowa but it’s close to it for this early in the season if the Hawkeyes want to have a legitimate shot at the Big Ten West Division title. An 0-2 start in conference play would make that a pretty steep hill to climb.

But it’s also a big game for the Spartans, who are trying to get back on track in conference play after a miserable season last year. For as successful as he’s been at MSU, Head Coach Mark Dantonio is definitely feeling some heat as a result of both on-and-off the field issues in 2016 — in fact, 11 scholarship players have left the program in the past year including three as a result of criminal charges. After a 12-2 record in 2015, winning the B1G title game against Iowa, and going to the College Football Playoffs (losing 38-0 to Alabama), the Spartans were just 3-9 last year, for the most part looked bad doing it, and lost nine of their last 10 games.

Iowa has had considerable success in recent seasons when playing its first B1G road game. While the Hawkeyes are just 9-9 overall under Ferentz in those games, they have won five straight and only lost once (Penn State in 2011) since 2009. Somewhat curiously, MSU has been the road-opener for Iowa four times — more than any other conference foe.

Kirk Ferentz is in his 19th season as Iowa’s head coach with a record of 138-93. He is the dean of college football coaches. He is just five wins shy of tying Hayden Fry for most victories as the Hawkeyes Head Football Coach. He has 82 conference wins in the B1G which ties him for sixth all-time. His first conference win was over the then 25th-ranked Spartans in Iowa City on October 7, 2000. Both Ferentz and Fry rank in the top seven in overall wins and B1G wins. The only other school that has two coaches in the top ten is Michigan (Bo Schembechler and Lloyd Carr).

Mark Dantonio is in his 11th year as Michigan State’s head coach where is record is 92-43. Dantonio is the third longest tenured coach in the Big Ten with only Northwestern’s Pat Fitzgerald between him and Ferentz. The Spartans have claimed three B1G Championships in the last six years (2011, 2013, 2015).

These key questions come to mind:

1) How will Iowa bounce back after the heart-breaking, last-second home loss to Penn State?

2) What will Michigan State’s mind-set be after taking a shellacking at home last Saturday at the hands of Notre Dame?

3) Both teams have been struggling to achieve consistency in their running games – usually strengths — which team will show more progress Saturday?

Iowa has a slight advantage all-time in this series: 23-21-2. Each team has 10 wins apiece with one tie in the games played in East Lansing. Ferentz is 7-7 overall vs. MSU and 4-4 when coaching against Dantonio, although Michigan State has won three of the last four. This is Iowa’s first trip to East Lansing since 2012.

Kickoff is set for 3:12 PM (CDT) and the game will be televised on Fox with announcers Aaron Goldsmith and Brady Quinn. As usual it will be broadcast on the Hawkeye Radio Network with Gary Dolphin and Ed Podolak. It will also be available on satellite radio: XM 957 and Sirius 195.

This is the second game this season that Iowa will be playing on a natural grass field.

There were no changes on the depth chart other than flip-flopping the Fullbacks. Otherwise the starters and back-ups are the same as going into the Penn State game.

Ferentz had two other significant comments regarding the roster. It appears that Safety Brandon Snyder is on course to play yet this season, following the ACL injury he suffered in Spring Practice. Back-up Sophomore Running Back Toks Akinribade, who saw playing time as a true freshman last season, was likely going to be red-shirted this year — but the injury to back-up RB James Butler has now left that tentative decision subject to change.

The current depth chart has 20 players from Iowa’s past two recruiting classes, including eight starters.

Michigan State is one of the younger teams in the country: 12 of its 22 projected starters from its last two recruiting classes — and 36 are listed on the depth chart this week.

MSU’s Defenses under Dantonio typically focus on stopping the run. Expect the Spartans to force Stanley and company to prove they can pass the ball effectively by focusing on holding Wadley in check. With Penn State’s success blitzing Iowa more than 40% of the time last Saturday, expect more teams are likely to blitz more against Iowa until they start getting burned by doing so.

The Spartans Defense ranks among the B1G leaders in several categories so far this season, including pass defense (first), third down defense (second), first down defense (third), and total defense (fourth).

Quarterback Nate Stanley already has thrown 12 touchdown passes in the first four games — that’s the most in the Big Ten and tied for sixth nationally. No QB in Iowa history has thrown for more in their first four starts. Against PSU, he completed 12 of his final 14 passes for 178 yards and two touchdowns — including the three-play, 80 yard scoring drive to give Iowa a 19-15 lead with just 1:42 left in the game.

Running Back Akrum Wadley needs just 128 rushing yards to pass Shonn Greene for 10th all-time in program history. Wadley ranks second in the Big Ten and sixth in the nation in all-purpose yards, averaging 166.3 per game — he leads Iowa with 338 rushing and 227 receiving yards per game plus touchdowns with four (2 run, 2 pass).

WR Nick Easley is Iowa’s leading receiver: 18 catches for 189 yards (10.5 average) and three TDs. He has become the newer version of Matt Vandeberg. Iowa’s Tight Ends are also making significant contributions led by Sophomore Noah Fant and Redshirt Freshman T.J. Hockenson — they have combine for 13 catches each resulting in either a touchdown (4) or first down (9).

MSU’s defensive strength has been its linebackers and this season is no different. The Spartans leading tackler is LB Joe Bachie who has 25 tackles. Other key defenders include DE Kenny Willekes and S Matt Morrisey.

MSU’s Offense is led by Sophomore QB Brian Lewerke – another true dual-threat quarterback. In fact, he is the Spartans leading rusher with 206 yards (69.7 ypg) and two TDs. He has passed for 751 yards and six touchdowns while throwing just two interceptions. He’s also the Big Ten’s leader in total offense (319 ypg) and third in passing (250.3 ypg). In seven career games, Lewerke has completed 60% of his passes for eight TDs and three picks.

The Spartans actually out-gained Notre Dame last Saturday 496 total yards to 355 — and passing (345-173) — but committed three costly turnovers against the Irish. Lewerke had a career day in that contest. MSU ranks second in the B1G and seventh nationally in third downs, converting 26 of 49 in its first three games.

Darrell Stewart and Trishton Jackson are two solid receivers. Stewart is the leading his team in receptions with 15 catches for 159 yards and one TD — and he has nine plays gaining 20 or more yards.

L.J. Scott (6’1”, 230 lbs.) returns as the top running back — the last time Iowa saw him was when he plunged into the end zone to win the 2015 B1G Championship Game in Indianapolis. Scott was MSU’s leading rusher last season, finishing with 994 yards on 184 csrries and six TDs. Scott is backed up by two other good running backs: Gerald Holmes and Madre London.

LB Josey Jewell leads Iowa and the B1G with 44 tackles and has lead Iowa in tackles the past two seasons. This year he also has two sacks, 5.5 tackles for loss, four pass break-ups, plus the big pick and 33 yard return he had last week vs. the Nitts that set up Iowa’s first TD late in the First Half. Iowa’s three starting linebackers have combined for 96 career starts and are the top three tacklers for the Hawkeyes: Jewell, Ben Niemann, and Bo Bower.

Iowa has two players who rank in the top 10 in the B1G in sacks: DE Anthony Nelson tied for third with 3 and true freshman DE A.J. Epenesa tied for sixth with 2.5.

DB Joshua Jackson leads the Big Ten in passes defended (9) and breakups (7). He leads Iowa with 2 picks and is fifth with 19 tackles. The two interceptions ties for the B1G lead.

Free Safety Amani Hooker got his first start vs. the Nittany Lions and had a very good game, including 13 tackles — he was the second leading tackler in that game for the Hawkeyes.

PK Miguel Recinos had a field goal attempt blocked vs. Penn State but other than that has been solid, including his kick-offs.

P Colton Rastetter continues to be inconsistent — his best punts (at least for distance) are rugby-style. Iowa had awful field position for most of last Saturday’s game – and some of that was his lack of distance.

Darrell Stewart has been solid on kick and punt returns for MSU — he had 79 yards against Notre Dame.

Two B1G teams currently rank in the top 20 nationally in both total offense and total defense: Penn State and Wisconsin.

Last week Michigan punched a hole or two in Purdue’s feel-good bubble, topping the Boilers in West Lafayette 28-10 — apparently the visitors locker room didn’t have that much impact on the Wolverines play despite Jim Harbaugh’s comments to the contrary.

There are five conference games this weekend. In addition to Iowa at Michigan State, Northwestern plays at Wisconsin in a key West Division matchup and there’s a potentially interesting contest in Minneapolis with the Gophers hosting Maryland.

This has to be Josey Jewell who played perhaps the game of his career, all things considered: 16 total tackles, 11 solo, 3 tackles for loss, 1 pick and huge return. He was everywhere on the field – and got there quickly. There’s a reason he’s the Big Ten tackling leader at this point in the season.

This is an easy choice this week: Defensive Coordinator Phil Parker – for constructing the Defense that nearly pulled off one of the biggest upsets of the year. Other teams will likely try the same thing in an effort to contain Penn State’s explosive offense going forward this season. 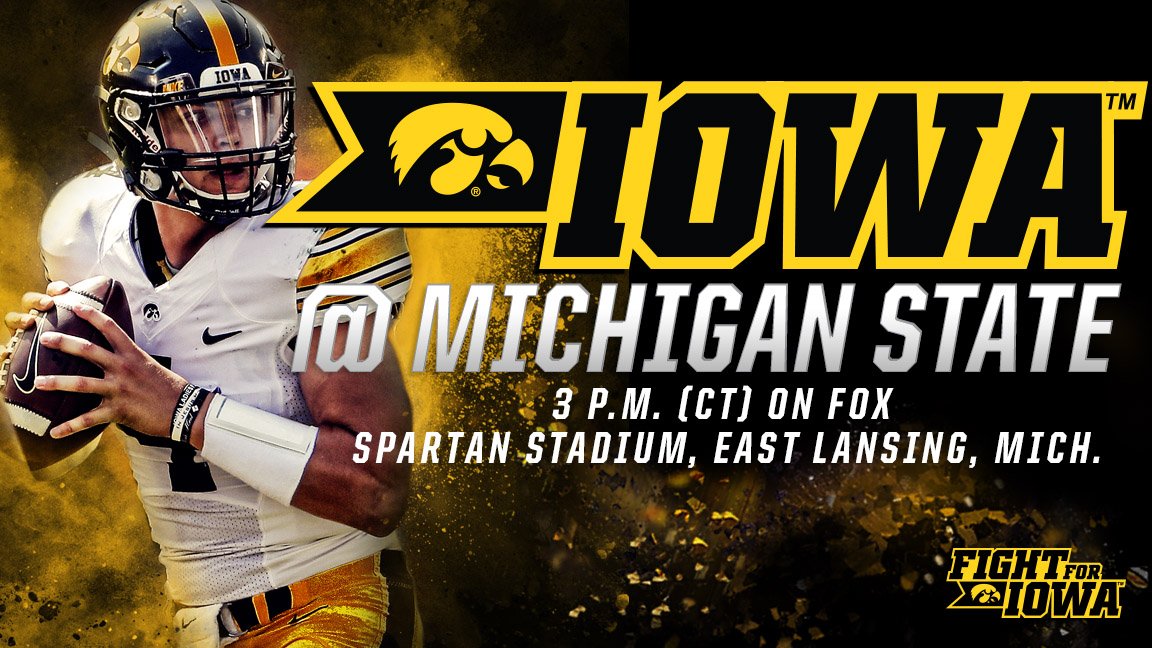