The Hawkeyes Mic picks are in for the Iowa – Miami 2019 season-opening game. It’s unanimous as all – and that’s not really a surprise.  Check them out – see if you agree or disagree.

Iowa has a tendency to start slow offensively in its first game, but most of those teams had inexperienced receiver corps. There will be no such problems this Saturday, coupled with a pass rush capable of wrecking any offense, let alone one with a new quarterback.

Oliver Martin aside, the only thing that truly matters? Iowa gets its ground game going in its season opener.

I think the Hawkeyes’ defense will have a lot of things planned to confuse all of the three Miami quarterbacks they expect to see on Saturday.

We’ll also get a look at a different Iowa passing game this season, given the experience now at wide receiver and the inexperience at tight end. It’s also going to be our first look at the interior of Iowa’s offensive line, which I think is going to be a huge key to this season. The line has this game at 21 1/2 points, so, now that we can bet legally in Iowa, I’ll take the Hawkeyes to cover.

I have Nate Stanley throwing 1 TD pass to Oliver Martin, along with Toren Young and Mekhi Sargent combining for 3 TDs on the ground and a defensive score of some type. Miami (Ohio) will get a late score in garbage time. For the bettors in the state, I think Iowa covers the spread, and the Under barely hits.

Far be it for me to be an outlier in this group of “expert” prognosticators – so I won’t. First games in a season can generally be a bit ugly – especially in the 1st Half. But Iowa is the vastly superior team here.

Too much inexperience for the Redhawks Offense at QB and RB means the Hawkeyes Defense should feast early and often. And Iowa’s Offense seems poised to have a very good (and potentially great) season: a 3rd year starting QB, solid trio of running backs, serviceable tight ends, and maybe the best group of wide receivers ever. The addition of Oliver Martin just makes that group even more dangerous for opposing offenses. It also appears Iowa may have finally solved its post-Coluzzi punting problems.

The only thing that could make this game close is mistakes by the Hawkeyes. I don’t think there will be enough of those to make a difference under the lights at Kinnick Stadium on Saturday night. Iowa rolls…

Iowa has a seasoned QB in Nate Stanley who needs a hot start to build momentum and develop trends with a newish receiving core. It also needs to develop a strong rushing attack to complement its passing. Expect the Toren Young/Mekhi Sargent combo to emerge and have a field day.

The Miami offense has three quarterbacks – none of which have taken a snap in college football. Not good for the Redhawks. The defense for the Hawkeyes has a few kinks to work out with Hooker leaving and Epenesa (finally) starting, but it has s nice set-up here to work those kinks out.

Iowa will struggle at times on both sides, and the rust will show… but ultimately, it’s the better team.

In lopsided matchups like this, the real game takes place in the betting world. I am very confident Iowa will win. I’m not quite as confident it will cover the 21.5-point spread. Some things to consider:

1)      Miami’s most recent winning season was nine years ago; Iowa is one of 15 schools to win at least eight games every year since 2015.

2)      Miami has lost 13 games in a row to Big Ten opponents but covered the point spread in eight of their last nine games against all opponents.

3)      A quick perusing of Miami’s Rivals site reveals that its fans strongly dislike head coach Chuck Martin and are not confident in quarterback Jackson Williamson. Williamson will be making his first career start on the road against a defense that has intercepted more passes in the past two years (41) than any school in the nation and also features A.J. Epenesa.

Saturday’s game will be Iowa’s first season-opener ever under the lights at Kinnick. It’s going to be a wild atmosphere. I think Iowa rolls over Miami as it did in 2016 when the Hawkeyes won 45-16 in Iowa City. 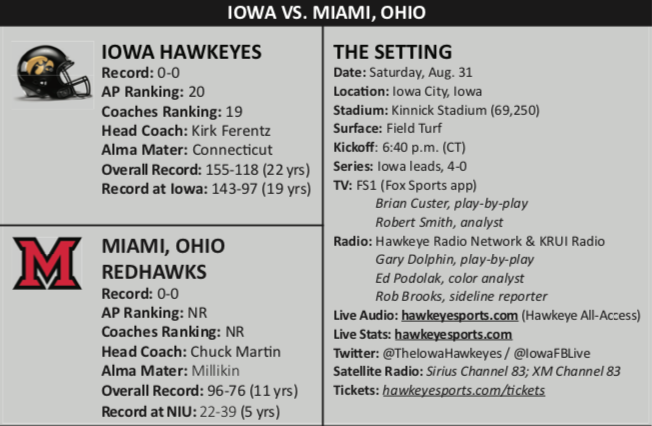