The Hawkeyes Mic picks are in for the 2018 Season Opening Iowa – Northern Illinois game. It’s a somewhat “nervous” unanimous – and the prognosticated scores are relatively similar. We’re also making our (early) season predictions for the Hawkeyes (subject to revision during the bye week). Check them out – see if you agree or disagree.

While Iowa’s limitations up front could create issues for the offense, the Hawkeyes should be able to control the line of scrimmage on defense. In a battle of attrition, I expect Iowa to earn a victory in a workmanlike performance.

The Huskies won’t be intimidated by the surroundings at Kinnick, but they also won’t add to a 6-4 record in their last 10 outings against Big Ten opponents. Expect all-American defensive end Sutton Smith to create a little havoc against an inexperienced and short-handed Hawkeye offensive line, but ultimately Iowa has enough playmakers to earn the win and make Saturday a record-setting day for coach Kirk Ferentz with a season-open victory.

Iowa Season Prediction: 8-4. The pre-season pick that can almost be placed in cement. There is the potential for this team to go beyond that, but questions need to be answered first.

I see Iowa’s offense struggling early on having its hands full with NIU’s pass rush. With a lot of new faces on the offensive line for Iowa due to suspensions, Stanley could have problems establishing a rhythm as Iowa tends to do in these types of match ups early in the season under Ferentz. It could be a game where he relies heavily on his TE’s Fant and Hockenson to bridge the gap until his line can block or his receivers can get open. Ivory Kelly-Martin, Toren Young, and Mekhi Sargent may play a pseudo-committee and establishing the run will aid in getting the air game rolling.

The Iowa linebackers will need to lean on the defensive line’s strength and make some solid plays in this one if they want to keep Northern Illinois at bay. The Huskies return 8 starters from last year including a dual-threat Quarterback in Marcus Childers. Dual-threat Quarterback with three green linebackers could absolutely spell disaster for the Hawks. The linebackers are inevitably going to make mistakes. Keeping them minor in nature and keeping good field position will be crucial for Iowa.

Ultimately, Iowa knows what they can expect from NIU and it’s a fight to the end. With NIU being projected to finish toward the top of the MAC, this would be a nice win for Iowa and I think they get it done Saturday.

The offense could hum at times this year with what I think is one of the best quarterbacks in the conference, a solid running back committee, elite tight ends, and a stellar offensive line (when all playing). If Stanley can find another complimentary piece to throw to in addition to Fant, Hockenson, Easley, and Smith-Marsette, he could have a very special season for the Hawkeyes.

Defensively, things aren’t as cut and dry. The defensive line consists of a list of guys who could be suiting up on Sundays in the future. Behind them, there is a lot to be desired, and frankly, a lot of unknowns. The linebackers are the most important group at Iowa, historically speaking. When it has an elite linebacking group, that’s typically when wins tend to stack up. Can the terrific defensive line make up for the inevitable growing pains associated with brand new faces behind them? That’s the question on everyone’s mind. The secondary has some quality experience, but they need to take the next step.

Overall, this Iowa team will have some ups, downs, and some in-betweens (snort).

Are they capable of winning ten games including wins on the road at Purdue, Minnesota, and even possibly Penn State? Sure. Are they also capable of dropping all three of those contests and losing at home to Iowa State and Northwestern? Absolutely.

Iowa will likely have another Kirk Ferentzesque season and end up right in the middle of those possibilities at 8-4. I have the Hawkeyes losing to Iowa State, at Minnesota, at Penn State, and at Purdue. Yes, I think they’ll beat Wisconsin. They’re due and I think seeing the Badgers early in the year at Kinnick Stadium benefits Iowa.

The Huskies defense is stout; it led the MAC in scoring defense (22.0 PPG), total defense (338.5 YPG), and sacks (43). Iowa fans will probably lose sleep over the idea of Northern Illinois’ All-American defensive end Sutton Smith going against a trio of backup tackles.

The matchup hinges on Iowa’s run game—can the Hawkeyes impose their will? Three of Iowa’s offensive linemen have zero career starts, and Ross Reynolds only has one. That inexperience will have to carve open lanes against a unit that ranked second in the MAC in rush defense (120.0 YPG).

Iowa is 28-1 over the past three seasons when it rushes for at least 100 yards, and 0-11 when it doesn’t. The Hawkeyes get Kirk Ferentz his school-best 144th win on Saturday, but it’s not a cakewalk.

24-17 seems to be the prevailing score prediction here and elsewhere – so I feel compelled to pick a different set of numbers. I sensed both a calm and sense of confidence in Kirk Ferentz on Tuesday at his first weekly presser of the season – even when questioned about the inexperience of his linebackers and the one game suspensions of his two starting Offensive Tackles. This is in spite of the fact that NIU boasts a dangerous dual-threat QB and an outstanding DE/OLB in Sutton Smith.

The Huskies have shown they can compete with and defeat quality B1G teams – so I anticipate this will be close with some of the usual first-game jitters and mistakes. But ultimately I think Iowa will pull away sometime in the second half. I’m also excited to see the tight ends continue to excel balanced with some of the better (and speedier) Hawkeyes WRs in recent memory. I also believe that, overall, Iowa will be more balanced in terms of pass-run offensively than NIU – and that should make a difference.

Season prediction: I’m going to “cheat” and offer “alternative” predictions for the 2018 Iowa Season. I think Wisconsin is the key game – an Iowa win in that one (and I think it’s a distinct possibility – finally) and the Hawkeyes have a good chance to go 10-2. Lose to the Badgers and then I’m going with 9-3. I think this team will gel, have a much better Offense, and an outstanding D-Line can allow the linebackers to grow. 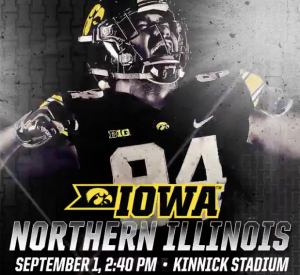