BREAKING NEWS: Oliver Martin has been cleared by the NCAA and B1G to play for the Iowa Hawkeyes beginning with the game vs. Miami, Ohio this Saturday. He will have three years of eligibility remaining. Iowa’s release with comments from both Kirk Ferentz and Oliver Martin:

IOWA CITY, Iowa – – University of Iowa sophomore wide receiver Oliver Martin has been approved for immediate eligibility by the NCAA and the Big Ten Conference. Martin, a native of Coralville, Iowa and a graduate of Iowa City West High School, transferred to the Hawkeye football program this summer.

“We are pleased that the NCAA and Big Ten Conference have approved Oliver’s waiver to play this season. Oliver is a tremendous young man who has been working hard since the day he set foot on our campus this summer. His teammates are excited to have him on the practice field and in the weight room, and we look forward to Oliver being able to contribute to our team.”

“I am ecstatic that the NCAA and the Big Ten Conference have approved our waiver request. I want to thank my coaches and my teammates for their help as I work to get ready. I have been dreaming of running out of the tunnel wearing the black and gold ever since I decided to join the program. I can’t wait to contribute to this team on the field.”

Oliver Martin would play for Iowa in Saturday’s season opener against Miami (Ohio), coach Kirk Ferentz said on Tuesday.
Whether the NCAA will let Martin play is another matter. So far there hasn’t been a ruling on the transfer waiver request for Martin, a third-year sophomore wide receiver from Coralville. If, at some point before the 6:40 p.m. kickoff on Saturday at Kinnick Stadium, Martin’s waiver is approved, he’ll play, Ferentz said.

“Yeah, he’s definitely in our plan to play him, and he would be on the travel team if we were traveling,” Ferentz said. “Yeah, if we get the green light, he’ll be in there playing at some point, absolutely.”

Martin transferred to Iowa from Michigan earlier in the summer, and has asked for immediate eligibility. Otherwise, he would have to sit out this season under the NCAA’s transfer rules. Martin took a redshirt season in 2017, then played 13 games with the Wolverines last season. He caught 11 passes for 125 yards and a touchdown. Martin isn’t listed on Iowa’s two-deep. Brandon Smith and Ihmir Smith-Marsette are listed at No. 1 at the two starting receiver spots, while Tyrone Tracy Jr., and Nico Ragaini are at No. 2.

Asked if he was frustrated there hasn’t been a decision made, Ferentz said, “Yes and no. I never set any expectations on this whole thing only because of what I’ve witnessed and read from other cases. We’ll play it by ear.”

“Obviously, in a perfect world, you’d really like to know … probably yesterday would have been better or even today. But just the way our depth is right now, it doesn’t impact us, and if he’s able to play, we’d love to get him in there and get him going. If he can’t, then we’ll keep working him in practice but not necessarily in the game plan.”
Ferentz was asked what he would change in the transfer process.

“I’m not sure I have the right answers, quite frankly, or what are the answers. I don’t know what they are at this point,” he said. “But, certainly, the biggest thing all of us would hope for is just some consistency in whatever it is what we’re going to do moving forward, just so we can kind of know what to count on, what not to count on. And not only in terms of interpretations but also the timeliness of the process. But it is interesting it is a hot topic right now, and I haven’t thought a lot about it in the last couple weeks, quite frankly.”

Ferentz said he has not received a specific timetable on when a ruling could come down. “I appreciate that every case is different, too, but just talking as a sports fan now, reading what you read and hearing what you hear, it seems like there’s a lot of inconsistencies — or different scenarios is probably a better way to put it,” Ferentz said. “But the one thing for sure to try to predict what’s going to happen in any case, it sounds like that might be impossible, and we learned that a couple years ago firsthand.” 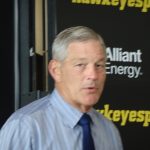 WHO’S NO. 2? Nate Stanley is No. 1 at quarterback on the depth chart, of course. Spencer Petras and Peyton Mansell are co-No. 2s, but Ferentz said Petras would be the first QB in the game after Stanley. “But we’ll play the week out and see how that goes, too,” Ferentz said. “In that competition as you can read between the lines, it has been pretty close all the way through. We’ll wait and see on that one. But right now Spencer would be the first guy in the game.” Mansell, a sophomore, played in five games last season, completing five passes for 83 yards. Petras, a redshirt freshman, played in two games last season and missed on his lone pass attempt.

INJURIES: Cole Banwart, listed as co-No. 1 on the depth chart at right guard with Levi Paulsen, is doubtful for Saturday’s game. “We’ll see how that goes, but right now I’m not optimistic that he’ll play based on practice this morning,” Ferentz said.

AND THE KICKERS: Caleb Shudak will handle kickoffs for the Hawkeyes. But for field goals and extra points, it’s still a competition between Shudak and Keith Duncan. “We’re probably going to talk about that in about three hours here,” Ferentz said. They’re both really doing a good job. They both competed. It’s been neck and neck. And I looked at the stats the other day, you can almost flip a coin. So it might be fair to say we’ll let both guys play and see what happens. And they both did a good job this morning in practice, which is certainly encouraging.”