Iowa was dominated in every phase by Purdue. That’s not even the most concerning part.

“They played harder than us,” Nate Stanley said.

Really? On a day where 18 seniors made played their final home game, Purdue was the more motivated team.

Also troubling is that nobody has any answers for Iowa’s inconsistent play. How can the Hawkeyes eviscerate Ohio State and then be completely unrecognizable the next two weeks?

“That’s a great question,” Josey Jewell said. “It’s something we need to figure out.”

The Hawkeye offense was about as good as Hawkeye Vodka. For the second straight week, the unit left a bad taste in fans’ mouths.

The offensive line couldn’t make adjustments on the fly, allowing a Purdue blitzer to come free off the right side multiple times throughout the game. Stanley was sacked six times and took some punishment on a few occasions.

Iowa ran 38 times for 82 yards, failing to reach the all-important century mark. Since 2015, the Hawkeyes are 26-1 when rushing for at least 100 yards and are now 0-11 when rushing for less than triple digits.

Last year, Iowa rushed for 365 yards against the Boilermakers. This year, 82.

The Hawkeyes weren’t much better through the air. Drops again plagued the receiving corps, and they killed Iowa drives. One sequence defined the night: Ihmir Smith-Marsette dropped a would-be big gain to stall out an Iowa possession, Colten Rastetter shanked a 21-yard punt, and Purdue went 50 yards on three plays for a touchdown.

Iowa’s defense has carried the team throughout the season, but they weren’t up to the challenge against Purdue. Specifically, the secondary got torched.

Anthony Mahoungou looked like prime Randy Moss against everybody not named Josh Jackson. Mahoungou was targeted on six straight attempts. Five were completed for 118 yards and two touchdowns, and the only non-completion was a pass interference on Manny Rugamba.

Reactive coaching doesn’t work. Stubborn coaching doesn’t work. It was clear at an early point in the game that Manny Rugamba was outmatched by Mahoungou. Then it was clear Michael Ojemudia couldn’t guard him either. Ditto for Matt Hankins. Finally, seven catches, 135 yards, and two touchdowns later, Phil Parker flipped Josh Jackson to the right side of the field to shut down Mahoungou. Purdue’s drives after the switch: punt, punt, punt, punt, field goal (after taking over at Iowa’s 16), end of game.

Turns out it is a good idea to put your best corner on a team’s best receiver. It took the coaching staff inexcusably too long to realize that.

The special teams were abysmal. Amani Jones’ roughing the punter penalty directly led to seven points for Purdue. Colten Rastetter was Iowa’s most productive player, punting six times for 178 yards. That’s a 29.7 yard average and has to be better. Is Ryan Gersonde really not any better?

I’m serious when I say I think Nate Stanley should be the punter. He was outstanding as a prep punter and would present Iowa with options in the fake department. I get not wanting to have your quarterback take any unnecessary hits, but how often does the punter actually make a tackle? Once a season?

Can anybody on Iowa’s roster return a punt? Matt VandeBerg made a bad fair catch call and then made a regrettable decision to try and field a punt with a diving effort. He fumbled and it ended the game.

All phases struggled, and Iowa was outcoached to boot. Things need to improve in a short week against Nebraska. 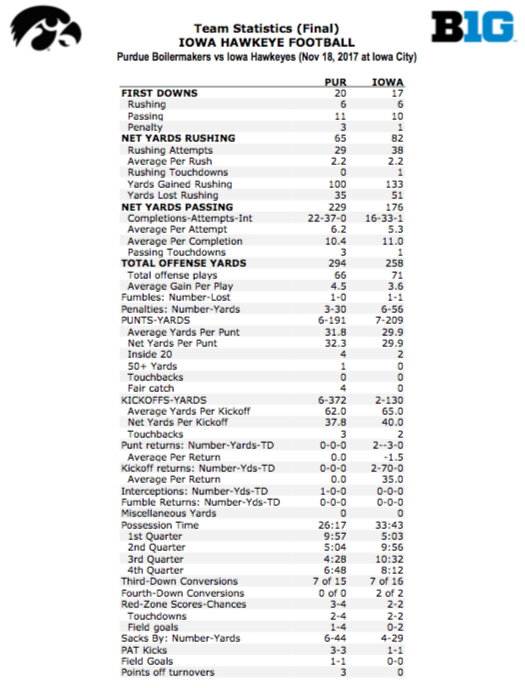