Iowa had a chance to win the game with a first-and-goal from Penn State’s 3-yard line and 3:18 remaining.

A series of miscommunications and poor decisions resulted in a Nate Stanley interception that sealed Iowa’s 30-24 defeat and could potentially cost it a shot at the Big Ten title.

It was an unfortunate time for Stanley to have the worst of his 21 career starts. The junior was off his game from the beginning and never settled in, finishing 18-of-49 for 205 yards and two interceptions.

Another key moment came early in the second quarter. Stanley sold a fake handoff on third-and-one from near midfield. Tight end TJ Hockenson slipped behind the Penn State defense and was wide open, only to be sent somersaulting to the ground trying unsuccessfully to chase down Stanley’s airmailed throw. It was a critical misfire.

Stanley threw another costly interception on Iowa’s next drive that was returned to the 3-yard line. Penn State’s backup quarterback Tommy Stevens ran in on the next play to tie the game at 14, despite all the breaks Iowa had gotten to that point.

Dominique Dafney took advantage of a mishandled snap to block a punt out of the end zone to give Iowa an early 2-0 lead. The Hawkeyes dialed up more special teams trickeration as punter Colten Rastetter lobbed a pass to defensive lineman Sam Brincks, who hauled in a basket catch that would’ve made Willie Mays proud.

Later Penn State suffered its second self-inflicted safety when the long snapper sent the ball out of the back of the endzone. With a chance to drive an early nail in the coffin, Stanley overthrew Hockenson.

Add in three recovered fumbles, Trace McSorley being limited with a knee injury, and a regrettable decision to go for it on fourth down, and the Hawkeyes were lucky to be tied at 17 at halftime.

That luck ran out as McSorley ran for a 51-yard touchdown on Penn State’s opening drive of the second half. Ankeny native Jake Pinegar hit a career-long 49-yard field goal (he also had makes of 44 and 45 yards) to put the Nittany Lions up two scores.

It was exceedingly apparent that Iowa’s offense wasn’t going to be the unit to get the Hawkeyes back in the game, so safety and Pennsylvania native Geno Stone, who took nine unofficial visits to the Nittany Lions, intercepted a McSorley pass and returned it for a touchdown to cut Penn State’s lead to 27-24 with 10:00 remaining.

Following another Penn State field goal and an 11-play, 72-yard drive, Iowa had the ball first-and-goal from the 3-yard line when Stanley threw the deciding interception.

With the play clock winding down, Noah Fant had no idea the ball was snapped. Kirk Ferentz tried to call timeout but it wasn’t granted. Stanley made an abrupt and regrettable decision to throw into traffic. He should’ve chucked it into the top deck of Beaver Stadium.

In a game full of weirdness, the clock struck zero as 320-pound Tristan Wirfs desperately rumbled down the field before being dragged to the ground.

Iowa (6-2, 3-2 B1G) missed a golden opportunity to place itself in the driver’s seat of the Big Ten West. Among many things, poor quarterback play ultimately did the Hawkeyes in.

Iowa will look to right the ship next week at Purdue. 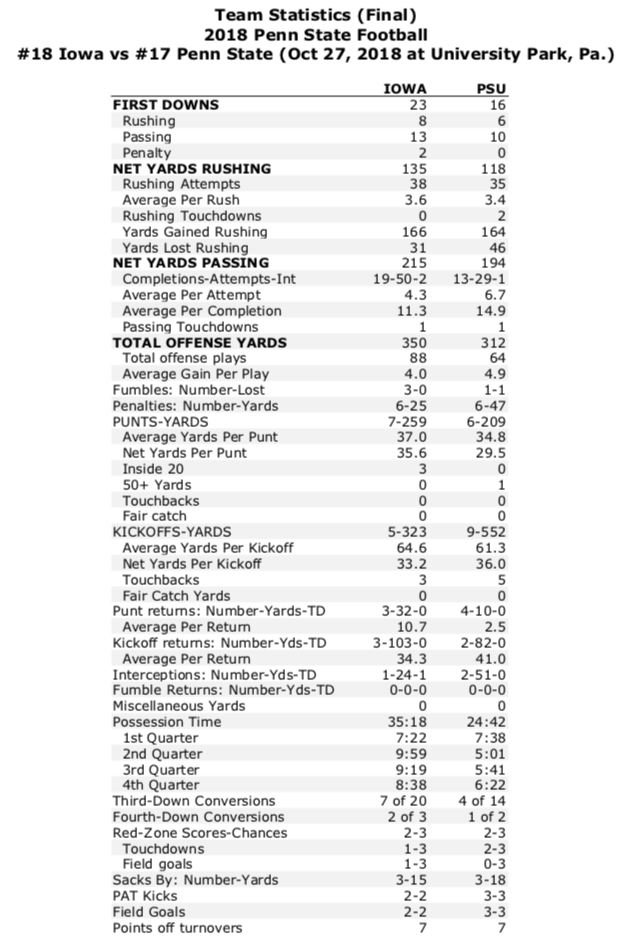