The Hawkeyes moved to 5-3 overall and 2-3 in Big Ten Play after defeating Minnesota 17-10 last weekend. The Buckeyes are 7-1 overall and 5-0 in the conference. Ohio State stormed from behind last Saturday in Columbus to stun previously undefeated and second-ranked Penn State 39-38 and sit alone in first place in the B1G East Division.

Ohio State has defeated Indiana, Army, UNLV, Rutgers, Maryland, Nebraska, and Penn State. Its lone defeat came in their second game of the season at the hands of Oklahoma and is currently riding a six-game win streak.

Ohio State leads this series in dominating fashion 47-14-3 and has won the last five games played against Iowa. The two schools have met just four times over the past 11 years – and last played in 2013 with the Buckeyes grabbing a come-from-behind 34-24 win in Columbus. The Buckeyes have a 17-6-2 advantage in games played in Iowa City. The last time Iowa won was 33-7 in 2004 at Kinnick Stadium.

Kirk Ferentz is in his 19th season heading the Hawkeyes with a record of 140-95 at Iowa. He is now just three wins shy of tying Hayden Fry as the winningest head football coach in Iowa History. Both Ferentz and Fry rank in the top seven in the Big Ten in terms of overall wins as well as conference wins. Kirk’s career mark as a head coach is 152-116. Ferentz is also the “dean” of college head football coaches.

Urban Meyer is Ohio State’s Head Coach and is 68-7 in six years heading the Buckeyes. This is his 16th year as a head football coach and his overall record is 172-30. Meyer is 21-1 in B1G road games since 2012 and 44-2 in regular season conference games.

When you compare the stats as well as the styles of play of these two teams, is there any realistic hope of Iowa upsetting the Buckeyes?

Can Iowa’s inconsistent Offense sustain drives against a tremendous Ohio State Defense and in particular an outstanding Defensive Line – especially with a red shirt freshman starting at Left Tackle and a true freshman starting at Right Tackle (the latter is a first in the Ferentz Era at Iowa)?

Can Iowa’s very good “bend but don’t break” Defense bend but not break against an extraordinarily productive Buckeyes Offense?

I’ll throw in a fourth question just for the heck of it. Can Iowa cut down on its penalties and turnovers which will be absolutely critical to staying in this game?

Iowa has won three of the last four games it has played against top-five teams at Kinnick Stadium: losing to Penn State earlier this season, upsetting Michigan last year, topping Michigan State in 2010, and defeating the Nittany Lions in 2007.

The Hawkeyes three losses this season have been decided by one possession – and two of those came down to the game’s final play. In fact, since 2014 Iowa has had just 12 regular season losses and 10 of those were decided by a single possession.

Iowa is just one win shy of achieving 400 victories when playing in Iowa City. The Hawkeyes all-time record at home is currently 399-218-16.

This is the annual “Black Out” Game and Iowa Players will be wearing their new alternate uniforms which were unveiled earlier this week.

The Iowa – Ohio State Game will be televised by ESPN with announcers Steve Levy, Brian Griese, and Todd McShay. It will be broadcast on the Hawkeye Radio Network with Gary Dolphin, Ed Podolak, and Rob Brooks – and it can also be heard on Satellite Radio – XM Channel 83 and Sirius Channel 83.

Iowa’s Depth Chart is largely unchanged from the Minnesota Game. Brandon Snyder remains out. James Butler is slotted as RB-2. Matt VandeBerg is officially listed as the starting PR, replacing Joshua Jackson in that role.

Iowa’s Offense faces perhaps its biggest challenge of the year going up against one of the best defenses in the country. The Buckeyes are 12th in Total Defense, 18th in Scoring Defense, 10th in Rushing Defense, and 24th in Turnover Margin. They virtually redefine the definition of team speed and are very deep – 27 different players have at least one TFL and 11 have sacks. The Buckeyes Defensive Line in particular rotates constantly and their Defensive Ends in particular are a potent force – 30 sacks already through eight games. The group of four DEs goes by the nickname of “The Rushmen”.

Ohio State is allowing opponents an average of just 107.2 YPG rushing. Opposing offenses have had slightly more success passing: 195.2 YPG through the air. Regardless of that, opponents are only averaging 18.2 points per game.

Iowa’s Offensive Line – a strength going into this season – has had issues after losing two veteran starters. The Offense overall has been inconsistent and plagued by penalties, dropped passes, and turnovers (fumbles in particular). The Hawkeyes have been more successful passing rather than running, despite the presence of RB Akrum Wadley.

Iowa Quarterback Nate Stanley – in his first season as starter – has been very productive: 17 TD passes against only four interceptions. He is tied for second in the Big Ten and 19th nationally with those 17 TDs. He has been terrific in the fourth quarter all year with a passing efficiency of 156.3 – as Iowa has out-scored its opponents late 76-33.

Stanley has spread the passing wealth around with 13 teammates catching his throws. WR Nick Easley is the leading receiver with 36 catches and four touchdowns. TE Noah Fant has been another go-to favorite with 19 catches and 5 TDs. WR Matt VandeBerg has 19 catches and 2 TDs – he has caught at least one pass in the last 27 games he’s played, has 125 career receptions, and is just two short of moving ahead of Marv Cook and into Iowa’s all-time top 10.

Iowa’s run game is only averaging 130.8 YPG and just 3.6 YPC. Wadley has 643 yards and five touchdowns, averaging 4.0 YPC. RB James Butler returned from injury last week vs. Minnesota and contributed to an improved rush. Wadley has 30 career TDs and is just two scores from moving into the top five all-time in Iowa History, tying Tim Dwight and Ronnie Harmon.

Iowa’s Defense is redefining the term “bend but don’t break” as it has consistently given up considerable yardage but largely kept opposing offenses out of the end zone. The Hawkeyes are only giving up 17.4 points per game – third in the B1G and 12th nationally. Iowa has held seven of its eight opponents below their scoring average by 11.1 points per game (the lone exception is Iowa State).

However, the Buckeyes come into Saturday’s contest first in the B1G and second in the FBS, averaging 571.3 YPG – and 46.3 PPG (first B1G, second FBS). So this is strength vs. strength and realistically Iowa’s main hope of trying to keep this game within reach.

Just like its Defense, Ohio State has a ridiculous wealth of talent on its Offense and is extraordinarily productive under first year Offensive Coordinator Kevin Wilson (former Indiana HC).

The Buckeyes are led by QB J.T. Barrett who completes nearly 70% of his passes, is B1G-1 and FBS-9 in Total Offense Yardage, B1G-1 and FBS-3 in Passing Efficiency, and has amassed 2166 passing yards (270.8 YPG) with 25 TDs against only one INT. He’s also OSU’s second leading rusher with 529 yards and five touchdowns – an average of 56.8 YPG on the ground. 13 Buckeyes have at least six receptions and eight have at least 13 catches.

All of this productivity comes about behind a veteran offensive line – one of the best in the nation.

Iowa’s Defensive Leader is LB Josey Jewell, who continues to lead the B1G and ranks fourth nationally with 11.6 tackles per game. He has a total of 81 tackles which is B1G-1 and FBS-13. He also has 9.5 TFL, which ranks second in the B1G.

Emerging start DB Joshua Jackson has started all eight of Iowa’s games and leads the nation in passes defended (17) and passes broken up (15) plus he has two interceptions thus far this season. Iowa’s defensive secondary as a whole has become a team-strength – especially after Amani Hooker moved into a starting safety role.

Key Ohio State Offensive Players, in addition to Barrett, Dobbins, and Weber, include:

Iowa appears to be rotating punters depending on the circumstances at any given time. Freshman Ryan Gersonde has assumed the starting role but Colten Rastetter is being used as the designated rugby-style punter.

Ohio State comes into this game with one of the conference’s best punters Drue Chisman who has been so effective that the Buckeyes are the only team in the nation that has allowed zero punt return yardage.

OSU’s PK is Sean Nuernberger who is B1G-2 and FBS-25 in average points scored at 9.0 per game.

With its win over Penn State last week, Ohio State leads the B1G East with a 5-0 record with Michigan State and Penn State both sitting at 4-1.

Wisconsin is 5-0 and continues to lead the West. The Badgers are also the only undefeated team left in the Big Ten and one of just five remaining in the FBS.

Play of the Game:

CB Josh Jackson. He had four PBUs to go along with three tackles and the tipped pass in the end zone that resulted in Gervase’s interception, snuffing out one of the few threats Minnesota had the entire game. He’s getting better by the game and its really turning Iowa’s defensive secondary into a team strength.

Phil Parker again. He’s going to have to build a bigger awards case if this keeps up. 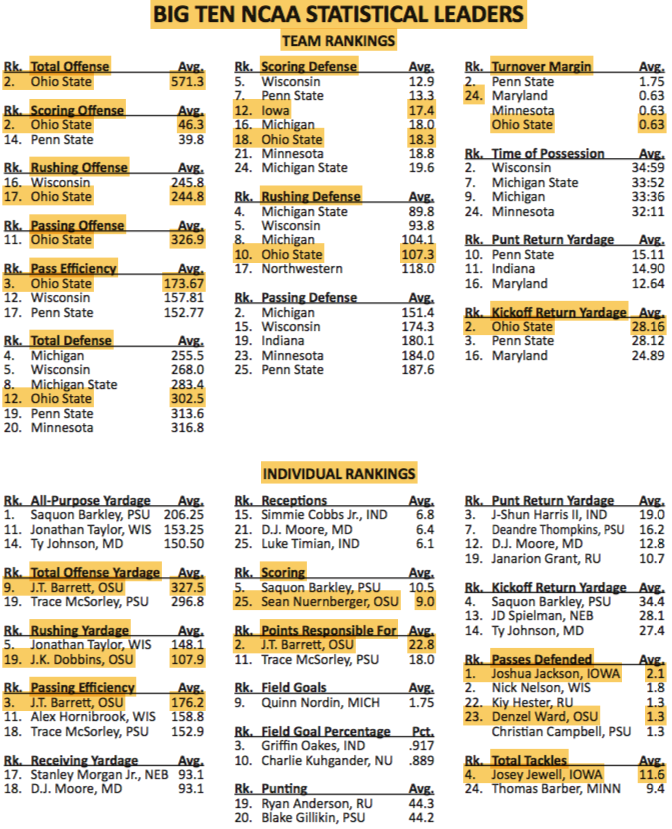 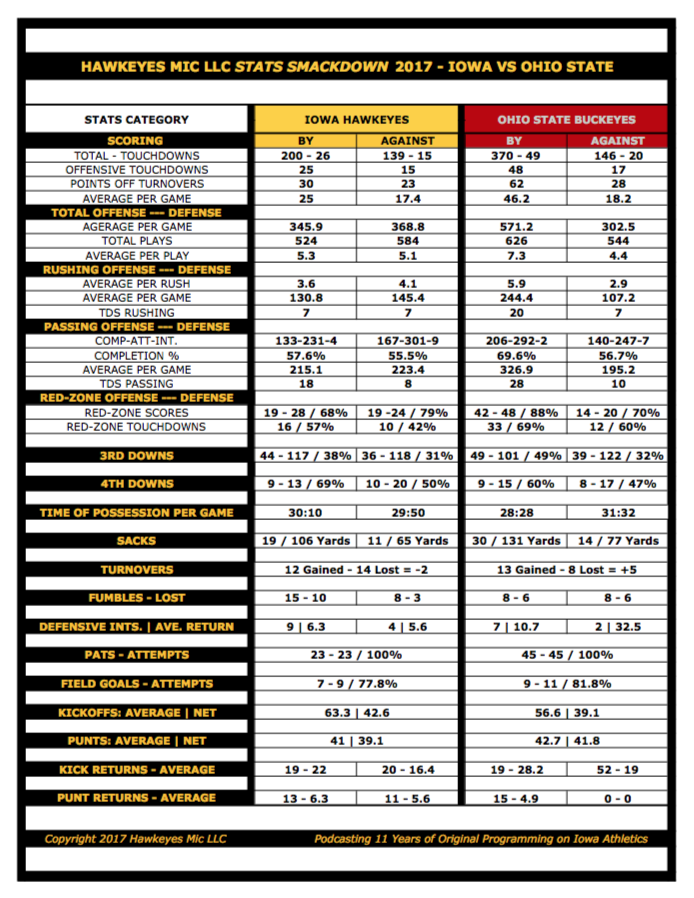