The Iowa Hawkeyes play host to the Minnesota Golden Gophers this Saturday at Kinnick Stadium in the annual battle for Floyd of Rosedale. Neither of these teams is still contending for the Big Ten West Division Title but a win is very important for both and could ultimately be helpful in bowl-slotting (assuming they become bowl-eligible). Iowa is 4-3, 1-3 while the Gophers have the identical record both overall and in conference play.

The Hawkeyes are coming off a bad 17-10 overtime loss at Northwestern where their offense turned in its worst performance of the year. Iowa’s wins include Wyoming, Iowa State, North Texas, and Illinois – with losses to Penn State, Michigan State, and Northwestern. Those three losses have been decided by one possession each – and two came down to the final plays of the games.

The Golden Gophers beat Illinois 24-17 in Minneapolis last weekend. Minnesota’s wins have come against Buffalo, Oregon State, Middle Tennessee, and Illinois. Its losses came at the hands of Maryland, Purdue, and Michigan State.

The bronze pig currently resides in Iowa City after the Hawkeyes won 14-7 at Minnesota last year. This is the 111th meeting between the two schools with the Gophers holding a 62-46-2 advantage overall. Iowa has won 12 of the last 16 meetings – it is 29-23-1 in games played in Iowa City including wins in the last seven games played at Kinnick Stadium. Floyd of Rosedale has been at stake for the last 82 games and Iowa has won 12 of the last 16.

Kirk Ferentz is in his 19th season heading the Hawkeyes with a record of 139-95 at Iowa. He is just four wins shy of tying Hayden Fry as the winningest head football coach in Iowa History. Both Ferentz and Fry rank in the top seven in the Big Ten in terms overall wins as well as conference wins. Kirk’s career mark as a head coach is 151-116.

Will Iowa’s Offense and rushing game – along with OC Brian Ferentz – recover from their collective abysmal performance in Evanston?

Can Iowa’s passing game and QB Nate Stanley put up points against a Minnesota Defensive Secondary that has been plagued by injuries and is somewhat suspect?

Can Iowa’s Defense slow down the Gophers potent rushing offense?

Minnesota, like Illinois, fields one of the youngest and most inexperienced teams in the nation and will be playing a road game for only the third time this year. 49 of the Gophers 110 players are freshmen or redshirt freshmen and 76 overall are underclassmen.

The Iowa – Minnesota game features an unusual 5:30 PM kickoff and will be televised by FS1 with announcers Joe Davis and Brady Quinn. It will be broadcast on the Hawkeye Radio Network with Gary Dolphin and Ed Podolak and can also be heard on Satellite Radio – XM Channel 196 and Sirius Channel 134.

Iowa’s Depth Chart is largely unchanged from the Northwestern Game. Most importantly, LB Josey Jewell has been back at practice and expected to start Saturday. Safety Brandon Snyder, however, is still out for this game. Safety Amani Hooker is now listed as the starter with the “or” for Miles Taylor removed. CB Manny Rugamba is back and listed as the starter. DT Matt Nelson is listed ahead of Cedric Lattimore.

True Freshman Ryan Gersonde continues to be listed as the starting punter after a solid performance at Northwestern.

RB James Butler’s status as of mid-week remains uncertain – he’s been cleared to play and has been practicing. OL Boone Myers remains doubtful and Ferentz hinted he might not return this season.

Iowa comes into this contest off its worst offensive performance of the season at Northwestern – where it could only muster 10 points and a game total of just 89 rushing yards. New Offensive Coordinator Brian Ferentz had – by far – his worst day so far calling plays and utilizing his offensive talent. Iowa’s Offense is 10th in the B1G at 350 YPG and 13th in rushing averaging just 3.5 YPC (just 2.7 per carry last week in Evanston).

The Hawkeyes running game remains stuck in cement despite Running Back Akrum Wadley’s talent and explosiveness. An offensive line that was supposed to be a strength has been undercut by key injuries and now includes one true and one redshirt freshman starting at the tackle positions – RT Tristin Wirfs and LT Alaric Jackson. Wirfs is the first true freshman to start at offensive tackle in the 19 years Ferentz has been Iowa’s head coach.

First Year Starting Quarterback Nate Stanley has continued to show progress, completing 58% of his passes for 16 touchdowns against just three interceptions. He’s been especially productive late in games. While the running game has often been sluggish, it’s been Stanley’s passing that has kept Iowa competitive even in the close losses. Nate has been terrific in the fourth quarter and overtime hitting for five TDs vs. one INT during which time Iowa has outscored its opponents 73-23.

RB Akrum Wadley is just three TDs from moving into Iowa’s top five all time which would tie Tim Dwight and Ronnie Harmon who have 32 each. Wadley has been more than solid when playing Minnesota: averaging 7.6 yards per carry and scoring last season’s game winning touchdown on a 54 yard run.

The Gophers acknowledged team leader on defense is LB Jonathon Celestin who has 52 tackles, 4.5 TFL, and one interception (returned for a TD last week vs. Illinois).

LB Thomas Barber (of the Barber family fame) is having a breakout sophomore season and is the team’s leading tackler with 63, including 44 solo – he also has 7.5 TFL, one pick, two forced fumbles, and two fumble recoveries.

DT Steven Richardson – a senior whose nickname is “Stove”. It generally takes a double-team to keep him out of the opposing offense’s backfield which creates matchup issues elsewhere along the line. He’s on several watch lists.

The Gophers defensive secondary has been plagued by injuries but despite that fact is giving up 183.1 passing yards per game which ranks 23rd nationally. 11 DBs have played this year including seven underclassmen.

The Gophers are tied for first in the B1G and 6th nationally in fumble recoveries with nine – leading to their +4 turnover margin.

Minnesota has started two quarterbacks this season. Redshirt Sophomore Demry Croft started against Illinois last week after also playing in the Michigan State game. Senior Conor Rhoda started the first six games. Croft is a true dual-threat QB. Fleck has not indicated who will start at Iowa but most believe it will be Croft. The two have combined to throw seven picks so far.

The Gophers have an effective trifecta at running back and have had considerable success rushing the ball. Juniors Rodney Smith and Shannon Brooks are listed as co-starters and Kobe McCrary has also seen considerable playing time. The three have combined for 1142 rushing yards while Croft has added another 159. They’re averaging 188 yards rushing per game (third in the B1G) and 4.2 yards per carry – and have 12 touchdowns running the ball.

Minnesota’s leading receiver is Sophomore Tyler Johnson who already has 27 catches for 499 yards and seven TDs. He’s had three 100-yard games this year and is averaging 18.48 yards per catch.

The Gophers have two productive tight ends – what else is new – and their role has increased due to the injuries at wide receiver: Seniors Nat Wozniak and Brandon Lingen.

Minnesota’s lack of depth is evident on its offensive line where it has been plagued by injuries – only one lineman has started all seven games.

Overall the Hawkeyes are 20th in scoring defense nationally – fifth in the Big Ten, giving up just 18.4 PPG.

Despite missing last week’s game, LB Josey Jewell still leads the B1G by a wide margin in total tackles as well as 11.7 tackles per game (which is also fourth in the FBS).

DB Josh Jackson has been added to the Bednarik Award watch list, leads the B1G in passes defended (13) and passes broken up (11; he is tied for fourth with two picks.

Iowa has a total of 15 sacks this season and DE Anthony Nelson ranks third in the Big Ten with five sacks (25 yards). He was second on the Hawkeyes last season with six sacks as a freshman.

Punter Ryan Gersonde performed well last Saturday, regardless of the wind, in just his second start. He averaged 52.6 yards on five punts with good hang time.

Place Kicker Miguel Recinos has been solid all season. Despite missing his first field goal attempt last week he came back to hit the game-tying field goal with just 1:30 left in regulation. Overall he is a perfect 21-21 in PATs and 6-8 on field goals.

Ferentz indicated Tuesday that he is keeping an open mind about who might return punts. Joshua Jackson failed to field a punt last Saturday that ended up going 80 yards and put Iowa in horrible field position at a crucial time in the loss at Northwestern.

Minnesota Place Kicker Emmit Carpenter was among the Big Ten’s best in 2016 and so far this season has hit 10-14 field goals and 23-23 PATs. Statistically he’s the most accurate kicker in Gophers History.

Ryan Santoso moved from kicker to punter last year and is first in the B1G (14th nationally) with a 45.0 average on 32 punts.

Bye weeks are over in the Big Ten and all 14 teams will be in action for the final five weeks of the regular season.

In the East three teams are tied with 4-0 conference records: Michigan State, Ohio State, and Penn State. Wisconsin leads the West – also with a 4-0 record – Nebraska and Northwestern are tied for second at 2-2.

The Big Ten has two of the remaining eight FBS undefeated teams: Penn State and Wisconsin are both 7-0 overall. The Nittany Lions are 16-1 in their last 17 games overall while the Badgers have won a school record 10 straight B1G wins.

The Buckeyes and Nittany Lions continue to rank in the top 20 nationally in both scoring offense and scoring defense. It will be interesting to see if that continues to be the case after their huge matchup this Saturday in Columbus.

Play of the Game: QB Nate Stanley’s 60 yard pass to WR Matt VandeBerg – the one real offensive highlight had at Ryan Field.

This is split three ways: LB Bo Bower (11) and LB Kevin Ward (4) who both had career-high tackles and DT Nathan Bazata who had a career-high 1.5 sacks.

There’s only one choice – if for no other reason than process of elimination. But Defensive Coordinator Phil Parker earns this for constructing the Defense that held NU to just 10 points in regulation. Iowa coulda, shoulda, oughta won if the Offense even made more than a token appearance. 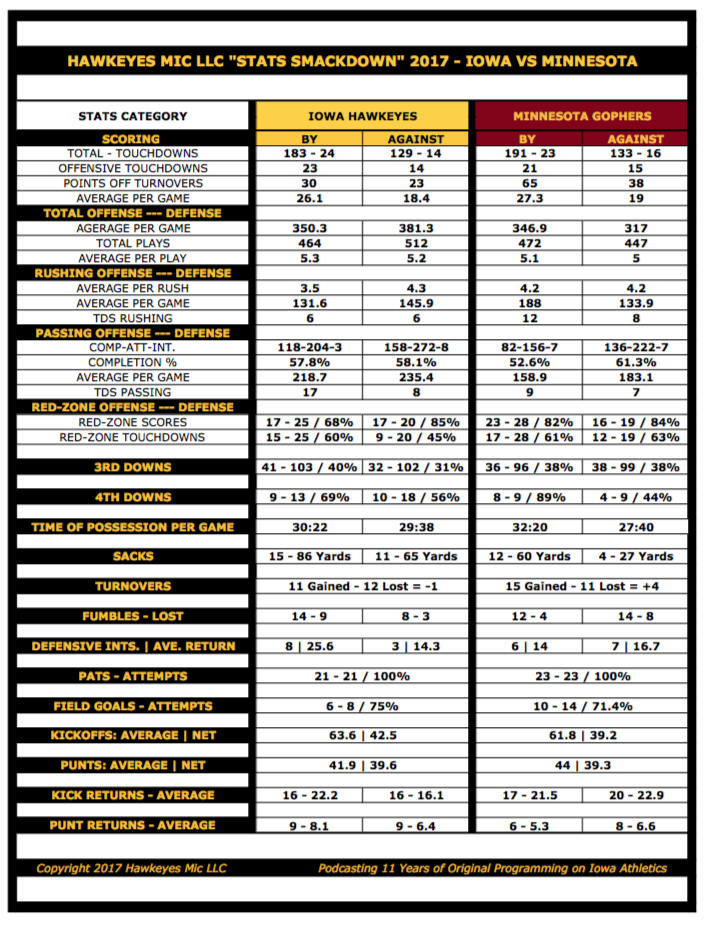