Iowa (4-2, 1-2) travels to Northwestern (3-3, 1-2) in a Big Ten West Division game at Ryan Field in Evanston on Saturday. This is almost certainly an elimination game in the West — whoever loses will be sitting with three conference losses with just five games left in the regular season.

Northwestern spoiled Iowa’s Homecoming last year at Kinnick Stadium in a come-from-behind 38-31 victory. The Hawkeyes lead the series 50-25-3, including 25-15-3 in Evanston. Iowa had won three straight until last year’s loss. The Wildcats are 11-9 vs. Iowa since 1995. This series has become perhaps the most intense and typically hard-fought apart from the Hawkeyes four annual trophy games.

Kirk Ferentz is the dean of college football coaches in his 19th year at Iowa where his overall record is 139-94. He ranks sixth all-time in the Big Ten and is now just four wins shy of tying Hayden Fry as Iowa’s all-time winningest head football coach. Coming out of bye weeks, Ferentz-coached teams are just 8-8 overall, including just 2-7 on the road.

Pat Fitzgerald is the second longest tenured coach in the Big Ten and is 80-65 in his 12th year at Northwestern – which is also his alma mater. Fitzgerald’s record against the Hawkeyes is 6-5.

How much progress, both offensively and defensively, will Iowa show coming out of its bye week – especially in running the ball and stopping the run?

Will either of these two teams get off to a fast start in this game – which could be the key to determining the winner – since both teams have been plagued by slow starts all season?

Can Iowa take advantage of Northwestern’s turnover problems (-6) this season and finally get in the “plus” column in turnover margin?

The Iowa – Northwestern game is an 11:00 AM kickoff and will be televised by ESPN2 with announcers Jason Benetti and Kelly Stoufer. As usual it will be broadcast on the Hawkeye Radio Network with Gary Dolphin and Ed Podolak. It will also be available on satellite radio: XM Channel 195 and Sirius Channel 135.

Iowa did get one important piece of good news on the injury front this week. RB James Butler has returned to practice and been cleared to play after suffering an elbow injury in the North Texas game. Ferentz said Butler would not play at Northwestern but may return in time for the Minnesota game on the following Saturday.

Besides some of Quarterback Nate Stanly’s impressive stats as starter, the Hawkeyes have outscored their opponents 70-20 in the fourth quarter – and they also have a TD in their lone overtime period at Iowa State. Stanley has a 189.8 passing efficiency in the fourth quarter and overtime – including 24 completions in 39 attempts for 399 yards, five TDs, and no picks.

Stanley has 15 touchdown passes, including three tossed against Illinois – which ties him for second in the Big Ten and 1th in the nation.

Running Back Akrum Wadley now has 403 carries in his career for 2246 yards – 10th all-time in Iowa history. His 5.6 yards per carry ranks third behind Tavian Banks and Shonn Greene (5.9 YPC). He is just 26 yards from passing Ronnie Harmon for ninth all-time. His 140.2 all-purpose yards per game is fourth in the B1G and 15th nationally. Wadley had his break-out performance two years ago at Northwestern: 26 rushes for 204 yards and four touchdowns after subbing in for starter Jordan Canzeri who was injured and left in the first quarter.

First-year LB Paddy Fisher leads the Wildcats in tackles with 47 – he is averaging 7.8 tackles per game which ranks sixth in the Big Ten.

Junior LB Nate Hall had a career day against the Terrapins. His 11 tackles gave him back-to-back games with double-digit tackles. He also had 3.5 TFLs at Maryland.

S Godwin Igwebuike – who was All Big Ten Second Team last year – has 40 tackles, one sack, five passes defended, and a forced fumble this season.

DE Joe Gaziano enters the Iowa game with 7.5 career sacks in his first 11 B1G games – and is just 4.5 sacks from moving into Northwestern’s top-10 all time.

Northwestern’s goal on offense is to create mass confusion for opposing defenses, primarily by running underneath crossing (or mesh) routes with its crew of receivers.

Northwestern third-year Starting Quarterback Clayton Thorson is a player Iowa tried hard to recruit out of high school. He’s another true dual-threat QB who can hurt teams running and passing the ball. Thorson played one of his better games of the season at Maryland, completing 27 of 49 passes for 293 yards and one TD – plus he rushed for 43 yards including an 18-yard touchdown. He likes to spread the wealth when it comes to passing. He connected with nine different receivers at Maryland.

That was his third game with at least 290 passing yards this season. He has moved into fourth place in program history with 6200 yards passing and 567 career completions. He needs just seven more TD passes to tie the Northwestern record in that category. Last week was his 20th career victory as starting QB and within two wins of tying the Wildcats record in that category as well. In the Iowa game last season, Thorson threw for three TDs and ran for another.

Senior Running Back Justin Jackson became the school’s all-time leading rusher after his season-best performance against Maryland last Saturday. He finished that game with 171 yards and two TDs. He has 4639 career rushing yards. Jackson is also the all-time leader in career all-purpose yards with 5350 and career rushing attempts with 963. The Wildcats are 19-4 when Jackson rushes for more than 100 yards – he has 23 of those. Last year against Iowa, Jackson racked up 171 yards rushing and one touchdown.

The Wildcats have four productive wide receivers: Macan Wilson, Flynn Nagel, Charlie Fessler, and Riley Lees – plus Justin Jackson and Cam Green are threats out of the backfield.

Northwestern is 22-24 in the red zone after going 5-5 last week at Maryland. 18 of those 22 scores have been touchdowns.

Turnovers have been a problem for Northwestern – they’ve lost five fumbles and been intercepted nine times. The turnover margin is -6.

Iowa Linebacker Josey Jewell continues to lead the B1G in tackles – by a lot – with 70 this season – which is also good for seventh in the nation. He has 9.5 tackles-for-loss (second in the conference), and he has a whopping 42 tackles in just his last three games. Fellow linebackers Ben Niemann has 33 tackles and Bo Bower has 32.

The Hawkeyes have three players ranked in the top 15 in sacks in the conference: DE Anthony Nelson is third with five sacks while DE A.J. Epenesa and Jewell are tied for 15th with 2.5 sacks apiece.

DB Josh Jackson, who has started all six games, is tied for the B1G lead in passes defended (10), is third in interceptions (2), and he fourth in passes broken up (8).

Iowa’s back end is bolstered by the return last game of FS Brandon Snyder just six months after an ACL injury. Snyder started against Illinois and had three tackles, two pass break-ups, and an 89-yard pick six. The new starting safety tandem of Snyder and Amani Hooker should solidify the Hawkeyes pass defense in the second half of the season.

Iowa officially has a new starting punter in Ryan Gersonde. Can he develop both consistency and distance quickly enough to be a difference-maker in field position (think Ron Coluzzi)?

PK Miguel Recinos remains nearly perfect for the Hawkeyes: 20-20 PATs. 5-6 FGs, and putting most of his kickoffs into the end zone for touchbacks or limited returns.

Iowa is averaging 21.9 yards per return on kickoffs (mostly by Ivory Kelly-Martin) – and 9.1 yards per punt return (mostly by Joshua Jackson).

Northwestern’s first-year PK Charlie Kuhbander became the first rookie kicker in Wildcats history to make three field goals in a single game (vs. Maryland last Saturday). For that performance, he was named the Big Ten’s Special Teams Player of the Week. Kuhbander has made six consecutive field goals and 20 straight extra points.

The Big Ten currently has two of the eight remaining undefeated teams in the FBS: Penn State and Wisconsin are both 6-0 to start their seasons. The conference also has two schools that rank in the top 20 nationally in both scoring offense and scoring defense: Ohio State and Penn State.

Iowa got some of its offensive mojo back – albeit against a pretty bad Illinois team. A very important win for the Hawkeyes, heading into their bye week. Nate Stanley threw three more TDs to bring his season total to 15 – he also threw just his second pick of the season. Akrum Wadley broke the 100-yard rushing mark again (115 on 23 carries) and moved into 10th place all-time in Hawkeyes Rushing History. Iowa’s Defense continued to surrender too many yards, especially on the ground – but also continued to hold opponents’ scoring in check.

Of course, it has to be Safety Brandon Snyder. An amazing six-month recovery from his ACL injury in the Spring. An 89-yard pick six. Inspired and inspiring play the entire game.

Kirk Ferentz – or to be more precise “New” Kirk. A fake punt. An on-side kick. Excellent Halftime adjustments. Fourth win of the season. History tells us his teams play their best as October and November unfold. That needs to happen again this season because the November part of the schedule, especially, is a bear. 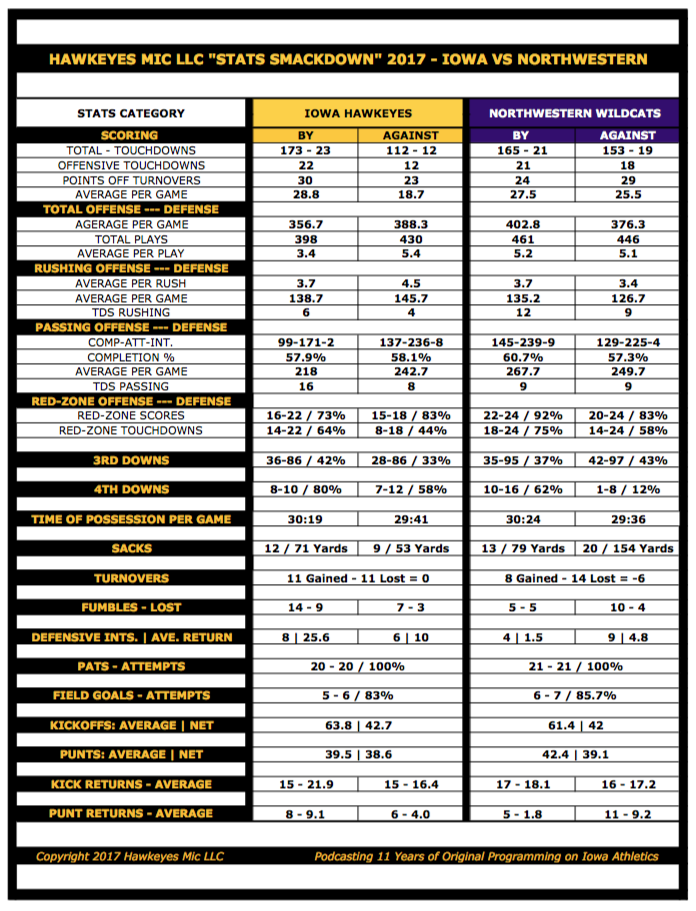