Iowa and Illinois were surprisingly locked into a close see-saw contest late the in the first half. The Illini had kicked a field goal to open a 13-10 lead with just 2:49 to play. Iowa took the kickoff and drove to the Illinois 41 yard line, lined up to punt, and perfectly executed a fake when Amani Hooker reeled off an 18 yard run to keep Iowa’s drive alive. Then Quarterback Nate Stanley hit Running Back Akrum Wadley for a two yard touchdown pass shortly thereafter. That completely changed the complexion of the game and took away any momentum the Illini might have had. The Hawkeyes went into Halftime with a 17-13 lead and never looked back.

That fake punt was one of only two “New Kirk” trick plays in this game. Midway through the first quarter, following Iowa’s first TD and a penalty on Illinois – the Hawkeyes did an on-side kick from midfield, stunning the Illini, and recovering the ball on the IL-37. That drive ultimately stalled inside the red zone when Iowa failed to convert on 4th and 1.

Iowa racked up 28 points in the final two quarters while holding Illinois to just three. The Hawkeyes ended up out-scoring the Illini 35-3 and put 21 points on the scoreboard in the fourth quarter alone. Six Iowa points came when Safety Brandon Snyder picked Illinois QB Jeff George, Jr., and raced down the right sideline 89 yards for a touchdown. Snyder returned to the field for the first time after suffering a torn ACL in the Spring.

Both teams had turnover issues: Iowa had two, Illinois finished with four. Iowa scored 17 points of those turnovers while the Illini only snagged three.

Stanley threw just his second pick of the season in the second quarter but made up for it by tossing three TD passes: one each to Nick Easley, Matt VandeBerg, and Wadley. Stanley now has 15 touchdown passes on the year through his first six games as a starter. He finished the game 17-32-1 for 247 yards. Running Back Ivory Kelly-Martin fumbled deep in Illinois territory after George fumbled on the first offensive play of the game.

George was 22-45 for 246 yards but was responsible for all four Illini turnovers, throwing three costly picks to go along with his first quarter fumble. Safety Geno Stone had one of those INTs and Amani Hooker had the other.

Wadley moved into 10th all-time in Iowa history with 2246 yards rushing – and is just 25 yards short of tying Ronnie Harmon for 9th all-time. He got back on track in this game, rushing 23 tiems for 115 yards with a 5.0 YPC average. Running Back Toren Young also was productive, gaining 32 yards on eight carries, averaging 4.0 YPC.

Iowa’s Defense was challenged by the Illini with George getting his first QB start this season. The Hawkeyes surrendered 446 yards to what had been an anemic Illini Offense – 179 over its average. Iowa was much more stingy in the second half, however, holding the Illini to just three points and 49 yards rushing in the final two quartesrs. Defensively the Hawkeyes were led in tackles by Linebackers Josey Jewell and Bo Bowers with ten apiece. Each team had just one sack.

True Freshman Ryan Gersonde was the starting punter in this game – after Colton Rastetter had started in the first five contests. Both teams combined for just five total punts: three by Iowa and 2 by Illinois.

The Hawkeyes (4-2, 1-2) head into their bye week before travelling to Northwestern on October 21. Illinois (2-3, 0-2) returns home to face Rutgers next Saturday. This was Iowa’s first game this season against a Big Ten West Divisiion opponent.

The 45 point total was Iowa’s highest against the Illini since scoring 54 in 1990.

QB Nate Stanley threw three touchdown passes today, his third game this season with three or more touchdowns. Stanley was intercepted on his 15th pass attempt, breaking a streak of 147 attempts without an interception.

LB Josey Jewell tied for the team lead (LB Bo Bower) with a game high with 10 tackles. It is his third straight and 17th career game with double-digit tackles. Jewell has 371 career tackles, eighth all-time.

FS Brandon Snyder’s 89-yard interception return for a touchdown ties for the sixth-longest in school history (Shaun Prater, 2011 vs. Tennessee Tech). Iowa has had at least one pix-six every year since 2009. The interception was the fourth of Snyder’s career, the first returned for a touchdown.

WR Matt VandeBerg had two receptions for 48 yards. He has at least one reception on 25 consecutive games played. He has 121 career receptions, 11th all-time.

WR Nick Easley tied his career-high with seven receptions for 59 yards and a touchdown. He has led Iowa in receiving four times this season.

RB Ivory Kelly-Martin caught a 3-yard touchdown from QB Tyler Wiegers. The touchdown reception and pass were career firsts for both players.

Both teams fumbled on their opening possession. Illinois’ lost fumble was their first of the season (forced by Matt Nelson, recovered by Ben Niemann).

The Hawkeyes are idle next Saturday. They return to the field Oct. 21 at Northwestern. 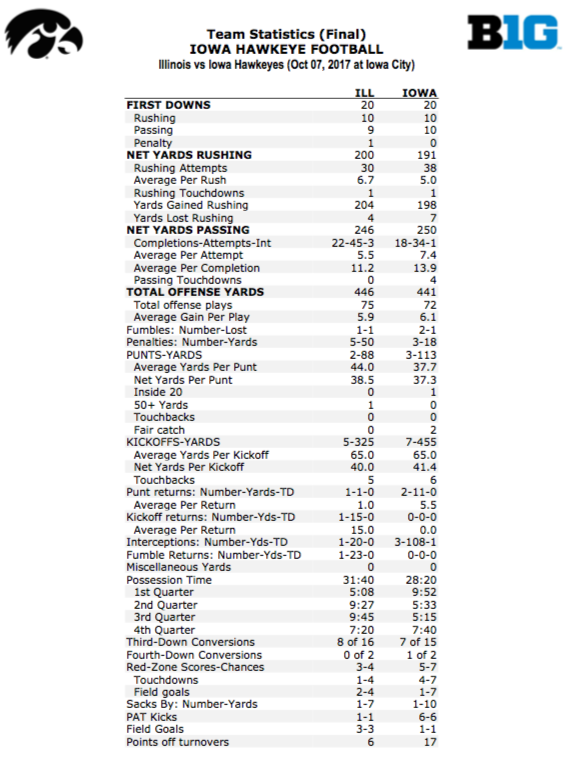 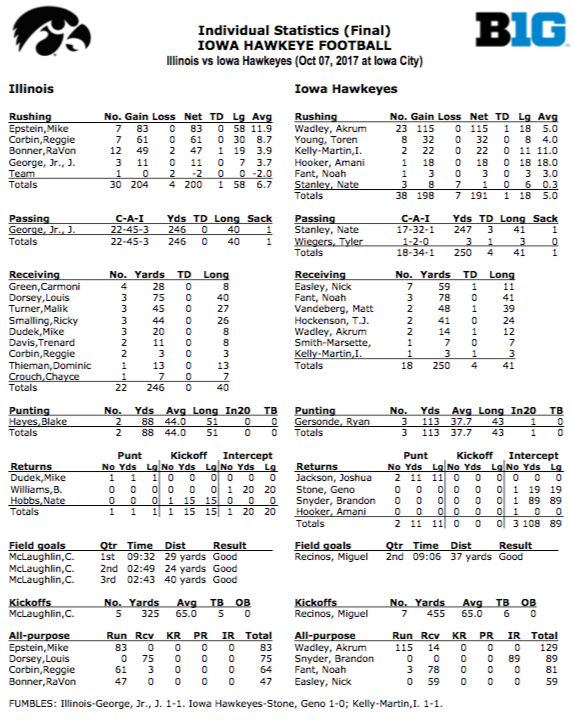 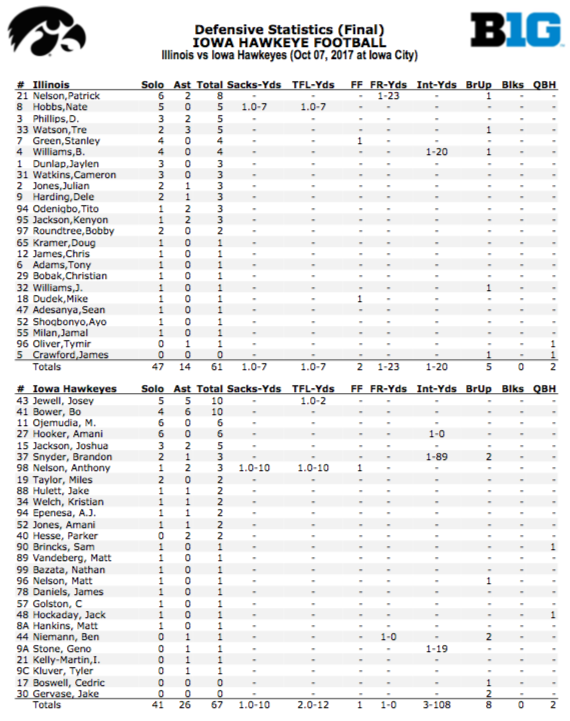