AMES — The longest day featured a locker-room picnic.
At some point early in the 2-hour, 6-minute storm delay of Saturday’s Iowa-Iowa State game, the Hawkeyes’ managers, with an escort from state troopers, went to different stores around town and bought 60 sandwiches for the players.

“Walked in, someone was eating a big hoagie,” Iowa coach Kirk Ferentz said.

“I did get a sandwich,” defensive end A.J. Epenesa said. “It was getting brutal in there, but I did get one.” “I didn’t get one,” center Tyler Linderbaum said. “I had an apple and some snacks.”

The annual renewal of the Cy-Hawk Series started when the parking lots opened at 5 a.m. so fans could get to ESPN’s College GameDay. It featured two weather delays totaling almost three hours. There was a field storm of Iowa State students who sat through the pouring rain and then noticed, as a severe thunderstorm was creeping toward Jack Trice Stadium during the second delay, that the security guards had taken shelter so it was time to pounce.

There was football, sloppy and spectacular, full of oddities and execution.

When it was over, the longest day — official time of the game was 5 hours, 54 minutes — featured an 18-17 win by the Hawkeyes, Iowa’s fifth consecutive in the series.

Iowa heads into the bye week battered, bruised, and with a record that’s perfect even though the play hasn’t always been. “Bottom line is we’re 3-0,” Ferentz said. “We’re happy about that. “

Keith Duncan’s 39-yard field goal with 4 minutes, 51 seconds left was the game-winner, then the Hawkeyes had to endure a final drive by the Cyclones that ended at the Iowa 39-yard line when Brock Purdy’s pass was wisely knocked away by safety Jack Koerner instead of being easily intercepted. 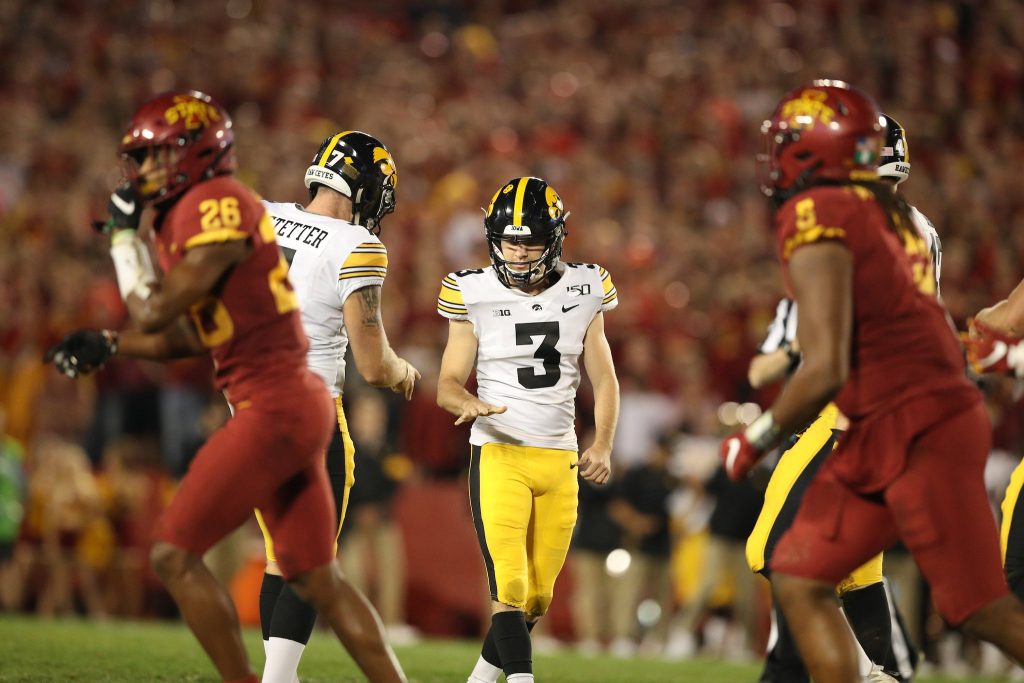 The strangest day ended with the strangest play. Iowa State was going to get the ball back with less than a minute to go after stopping Iowa for a quick three-and-out. The punt by Michael Sleep-Dalton was going to be fielded for a fair catch by Iowa State’s Deshaunte Jones. But teammate Datrone Young, trying to block downfield, ran into Jones. The ball hit off Young, and Iowa’s Devonte Young recovered.

Three kneel-downs by Stanley, and the game was over.

The Hawkeyes had been carved by Purdy for most of the day, surrendering an agonizing collection of big plays. They had survived their mishaps, their struggles to move the ball. In the longest day, they won. 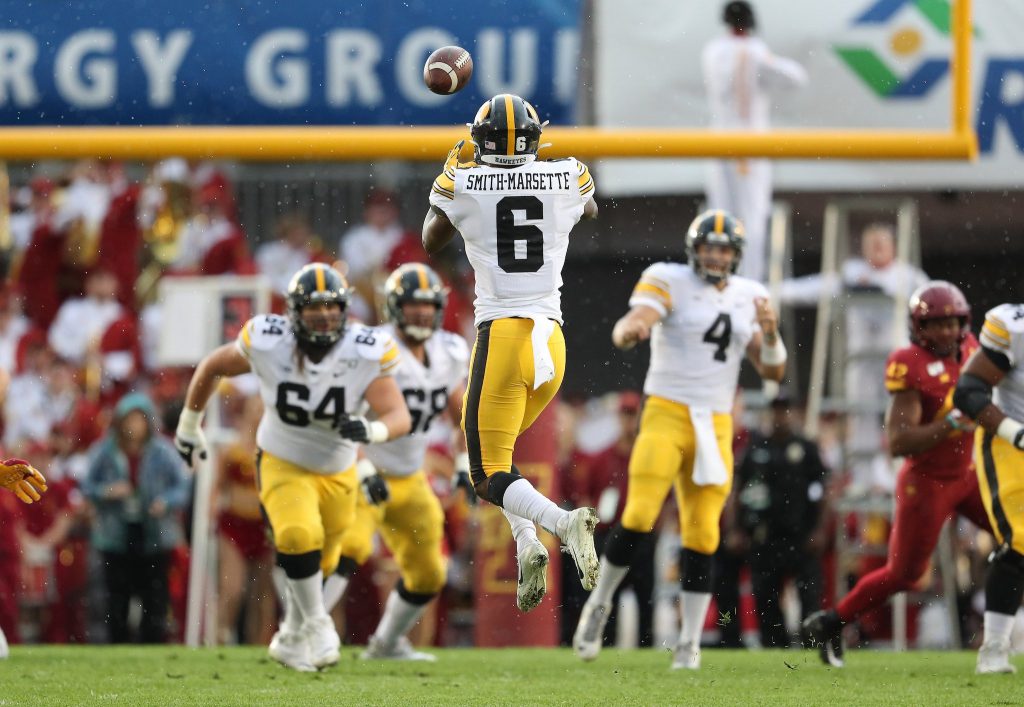 This was the stickiest of situations, and the soggiest.

A day that was originally forecasted to be sunny and warm was gloomy from the beginning as storms built in the west.

The first delay, for lightning nearby, took 49 minutes. Seventeen plays had been completed in the game, and Iowa had a 3-0 lead.

The second one, with more lightning in the area and a storm approaching, took much longer.

“During the first one or the second one, I can’t remember which, I thought maybe we better practice, which is as dumb as it sounds,” Ferentz quipped. “For baseball, it’s easy. Go in there, play cards. They’re used to rain delays. For football, it’s unusual.”

“Obviously it was challenging,” Linderbaum said. “There’s more mental stuff that goes into it. You can’t get amped up — you have to relax, stay focused. Can’t be too relaxed, obviously. Go out and play, come back, play, come back. So no, that was something new to me.”

“It really wasn’t all that difficult,” Epenesa said. “You just get off your feet, relax, keep going over the game plan. Put your headphones in, stay locked in, don’t lose your grip on that focus. When we got back out there, it was just second nature.”

But, back out there, the Hawkeyes couldn’t stop the big plays early. Four plays after the first delay, Jones caught a backward pass from Purdy, then launched his own pass down the right sideline that La’Michael Pettway caught for a 51-yard touchdown.

Purdy would complete 12 consecutive passes in one stretch, and later threw a 73-yard touchdown pass to Tarique Milton for a 14-6 lead. Purdy completed 24-of-34 passes for 276 yards. Iowa’s defense would eventually slow him, although the Cyclones would slow themselves with costly penalties and occasional slips on the wet turf.

“I think it was just the bend-don’t-break mentality,” Welch said. “Keep fighting. Keep putting pressure on them.”

“I think we did pretty good, for the situation we had,” Epenesa said. “We played sloppy all day. I’m not going to put that on the rain delay, I’m going to put that on us, the defense. We didn’t do what we want to do. We scratch, we claw, we fight. We were able to pull some big clutch moments out. 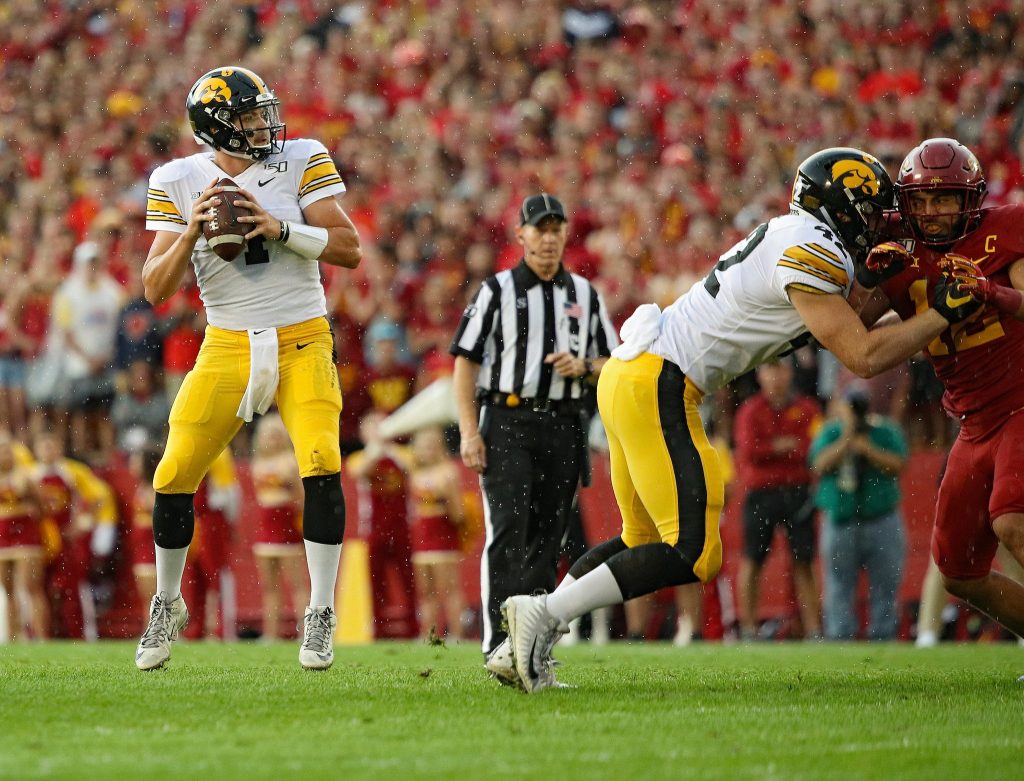 Stanley threw for 201 yards, completing 22-of-35 passes. There were times he wasn’t sharp, but he was good when he had to be. Iowa was 10-of-19 on third down, and three of those conversions came on big Stanley plays — a 27-yard pass to Smith-Marsette on third-and-22 from the Iowa 19 in the third quarter, a 14-yard run on third-and-11 from the ISU 26 in the fourth quarter, and a 14-yard pass to Mekhi Sargent on third-and-4 from the Iowa 31 later in the fourth on the drive that ended with the last of Duncan’s four field goals.

“That’s the value of having a veteran quarterback,” Ferentz said.

“Obviously, when we win, I don’t care how I did,” Stanley said. “Yeah, I made some throws, some throws I could have had, some decisions I could have made a little better. But we won, and I’m just happy to able to say we won.”

On the longest day, it was the best thing for the Hawkeyes to say. 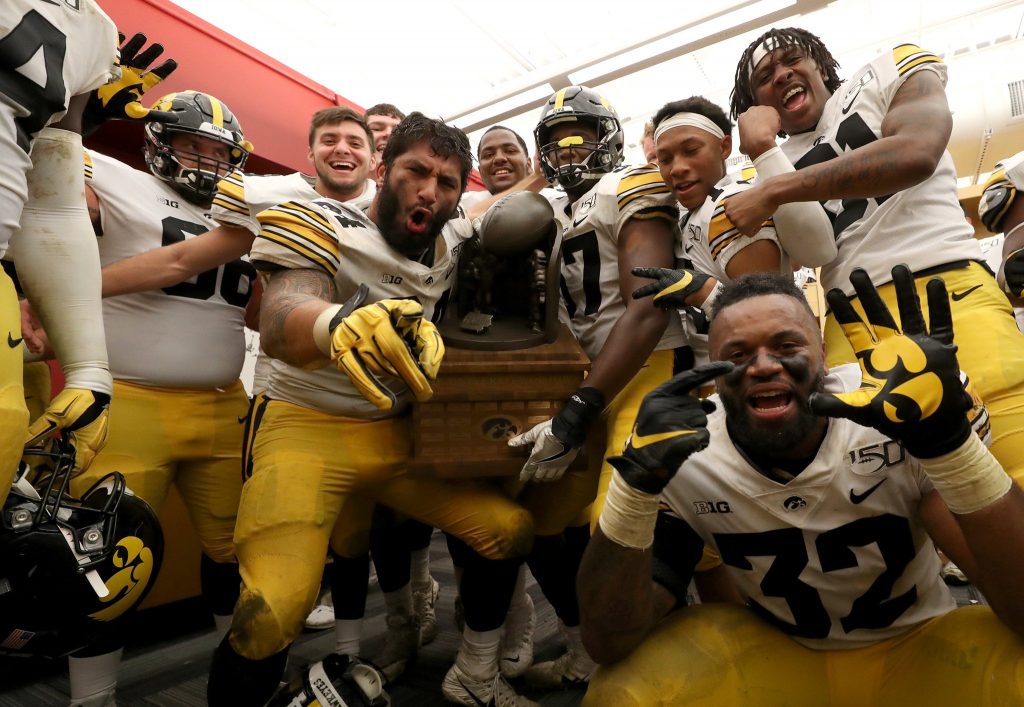