There is something better than one zero for Iowa’s defense.

The Hawkeyes’ smothering 30-0 victory over Rutgers in Saturday’s Big Ten opener at Kinnick Stadium was defensive sorcery in its simplicity, but defensive end A.J. Epenesa wants it to be just the beginning.

“We’re happy about the way we played today,” said Epenesa, who broke free after a day of double teams in last week’s season opener against Miami (Ohio) to record one sack, four hurries, and a lot of havoc. “You’re never satisfied when you want to be great as a defense and as a unit.”

“It’s positive for our defense,” said linebacker Djimon Colbert, who had five tackles and an interception. “To not allow any points on defense, that’s huge, any game, no matter who we’re playing. To get a shutout, that’s a big confidence booster for us.”

“It’s a plus for the defense, to have that zero on the board,” said cornerback Michael Ojemudia, who also had an interception. 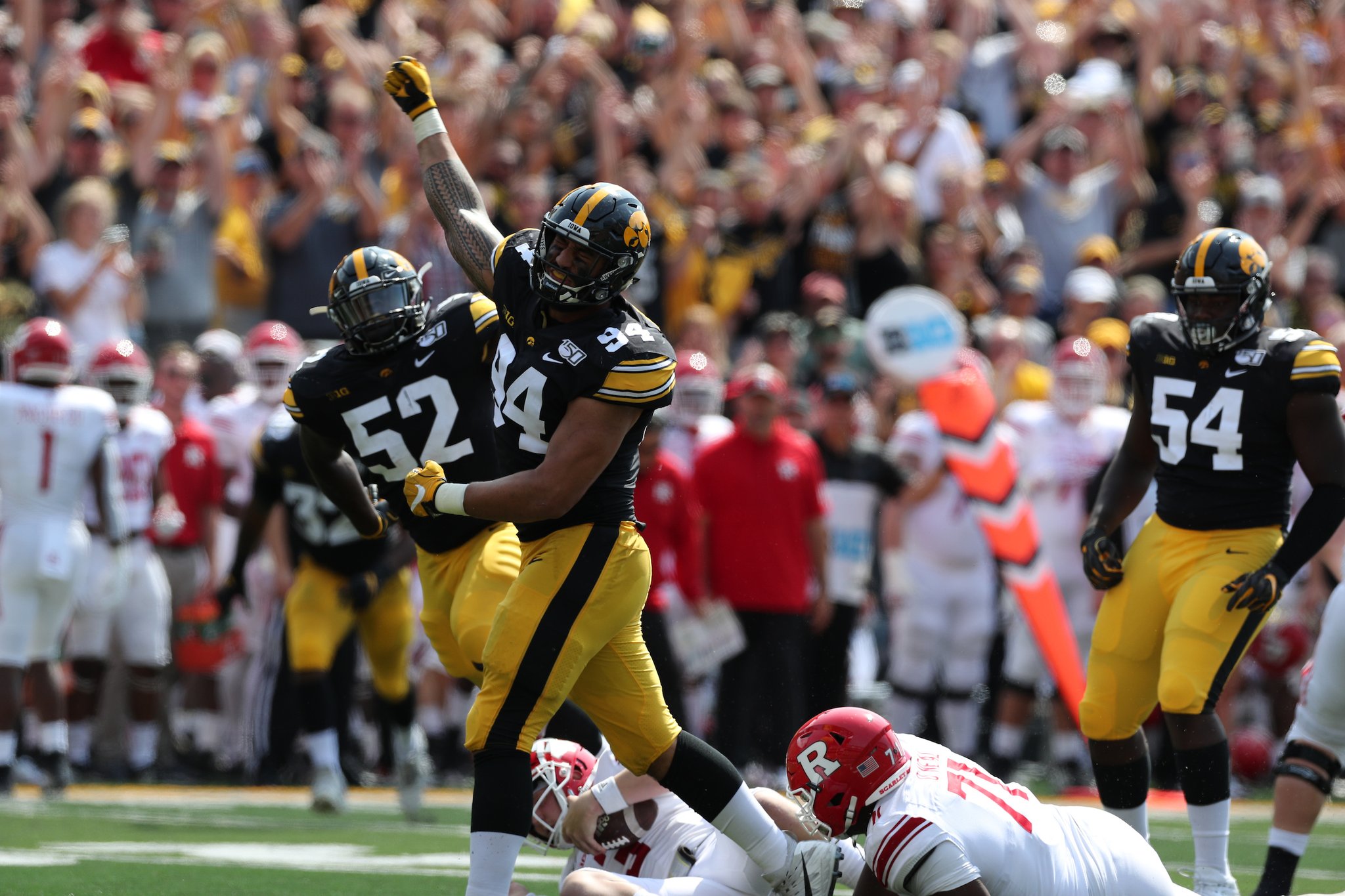 The Hawkeyes (2-0), ranked 19th in the coaches poll and 20th by the Associated Press, were stifling on a warm day.

Rutgers (1-1) could get nothing going offensively. The Scarlet Knights had five first downs, rushed for just 84 yards, and threw for 41. It was the fourth-lowest total allowed by an Iowa team in coach Kirk Ferentz’s 21 seasons.

“I think we got done what we wanted early in the game,” Colbert said.

Rutgers was constantly sputtering. Starting quarterback McLane Carter, who was 5-of-15 passing for 22 yards and one interception, left after an injury late in the first half. Backup quarterback Artur Sitkowski completed just 4-of-11 passes for 19 yards with one interception.

“Any offense when they struggle, the pressure builds up, and we kind of noticed that,” Colbert said. “We knew we had to keep applying that pressure.”

“We disrupted their quarterback,” Ferentz said. “Part of it is because we were covering really well, so he didn’t have a place to go with the ball and then threw it away or whatever he did.”

The Hawkeyes weren’t that creative, but sometimes basic can be the most devastating.

“We played a lot of base, so we didn’t really go too far from what we want to do,” Ojemudia said. “Our biggest emphasis was to stop the run, and that forced them to pass the ball. Just stopping the ball was big.”

“It gave us a little bit of confidence,” said linebacker Kristian Welch, who led the Hawkeyes with eight tackles. “It reinforces how our preparation during the week is so important.”

“Winning in this league is hard,” Rutgers coach Chris Ash said. “It’s difficult. You’ve got to be able to run the ball, and stop the run. To score points, you have to be able to throw the ball and get explosive plays. Today, we didn’t do very good in any of those categories.”

Iowa outgained Rutgers, 438-125. The Hawkeyes had more than a 15-minute edge in time of possession, and ran 73 plays compared to the Scarlet Knights’ 49.

Rutgers had 554 yards of offense in last week’s 48-21 win over UMass, but the Hawkeyes didn’t let the Scarlet Knights get anything close to that number.

The grind of the Hawkeyes’ defense, and the steady hum of movement by the offense, was exhausting.

“The second half, we just kind of wore down at the end,” Ash said. 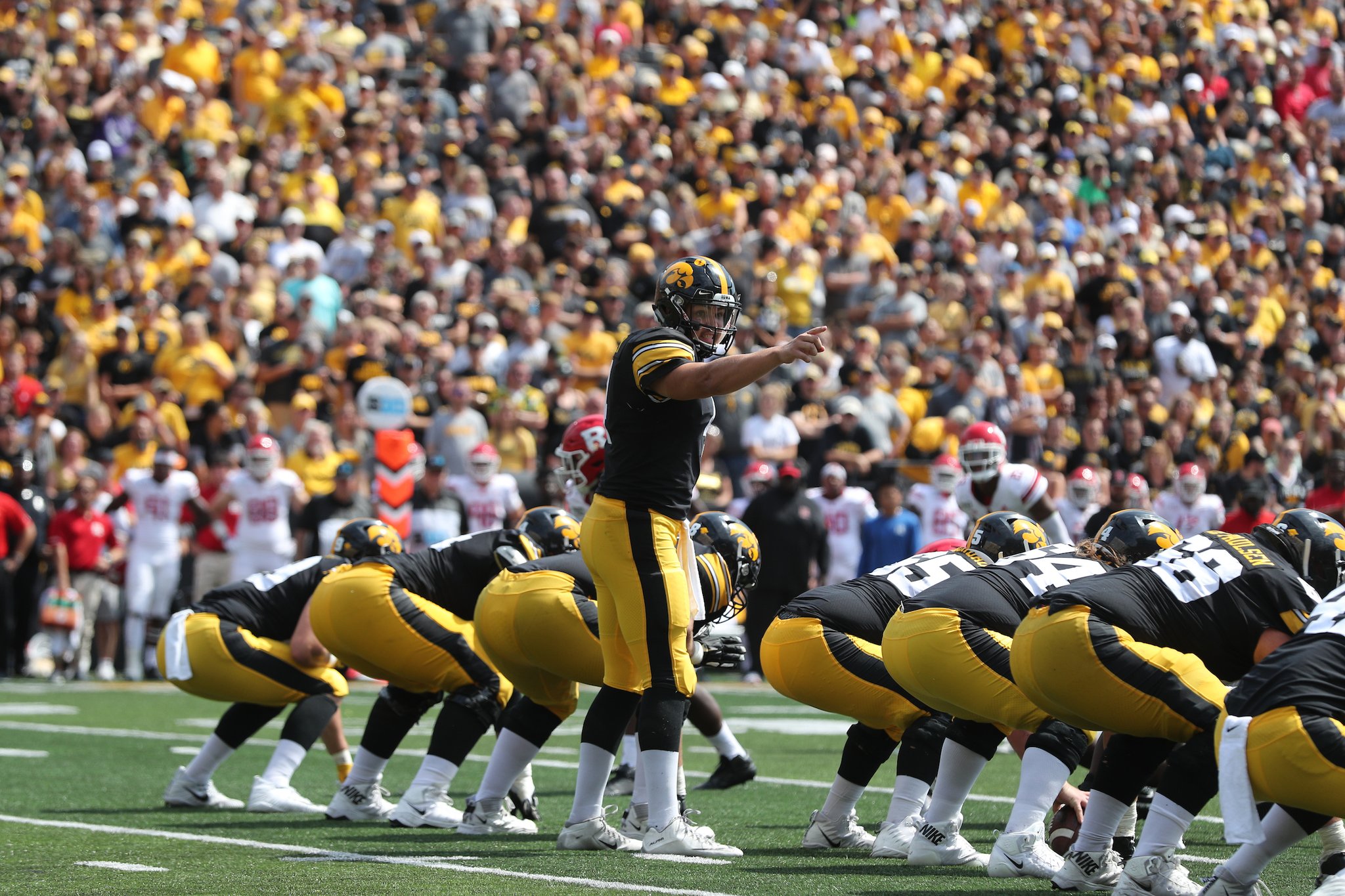 Those numbers are impressive considering how often the Hawkeyes were pinned near their end zone.

Rutgers punter Adam Korsak had five punts that were downed inside Iowa’s 5-yard line, four inside the 3. Iowa turned one of those into an 11-play, 97-yard touchdown drive, and moved 32 yards on one possession and 43 on another.

Whatever field position advantage the Scarlet Knights could get never mattered. Rutgers had three first-half drives that started between its 40 and the 50-yard line and moved 20 yards on the three possessions.

What was left at the end was a zero for Rutgers, a number that pleased the Hawkeyes, but left them wanting more. 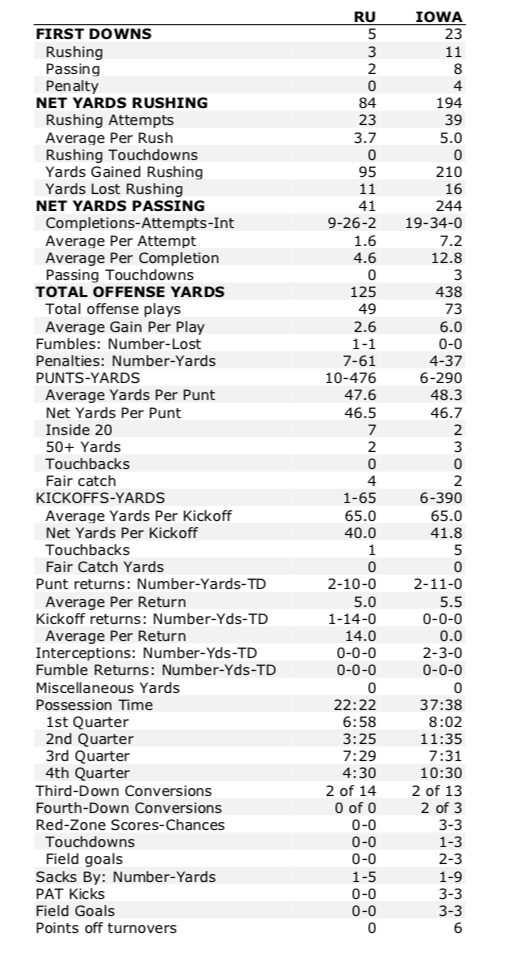