The Hawkeyes lost their second game in a row with a 38-36 defeat at the hands of the Purdue Boilermakers.

A critical decision came with 9:33 remaining in the third quarter when Kirk Ferentz elected to go for two to tie the game. Iowa failed to convert (as they did on another two-point try in the fourth quarter) which left two points on the board—the margin of victory for Purdue. Coaches shouldn’t chase points unless it’s the fourth quarter or there are extenuating circumstances.

Ferentz addressed the officiating in his opening remarks after the game. It was a break from character for a normally reserved coach. Ferentz was unhappy with two holding calls made late that cost Iowa a shot at extending its lead. Ferentz also took issue with a pass interference call on Julius Brents that set up Purdue’s game-winning field goal.

However the Hawkeyes have nobody to blame but themselves for losing a winnable game, and it starts with the defense.

The unit that has anchored Iowa throughout the year came up short on Saturday. Iowa surrendered too many big plays, much like last year’s Purdue game. The Boilermakers mercilessly picked on Michael Ojemudia a year ago and they chose Riley Moss as their target this time.

Moss was primarily covering Terry Wright, who finished with six catches for 146 yards and three touchdowns. 24 percent of Wright’s career yardage came on Saturday. Ojemudia replaced Moss late in the game but Iowa had already given up its most points of the year.

Moss’ true freshman counterpart Julius Brents also struggled. He was beaten on the play that gave an Iowa opponent its first opening touchdown of the season and also had the costly pass interference near the end. Iowa will need to sure up its cornerback play to close the season strong.

Offensively, the numbers were better than the play on the field suggested. 36 points looks good until you dig a little deeper. On one touchdown drive, Purdue penalties accounted for 35 of the 47 yards. Another touchdown was set up by an interception by Amani Hooker, so the offense only needed to go 26 yards.

It was a disappointing loss for a team with its sights set high, but Iowa is right around where most pre-season projections had them. The Hawkeyes (6-3, 3-3 B1G) host Northwestern on Saturday. 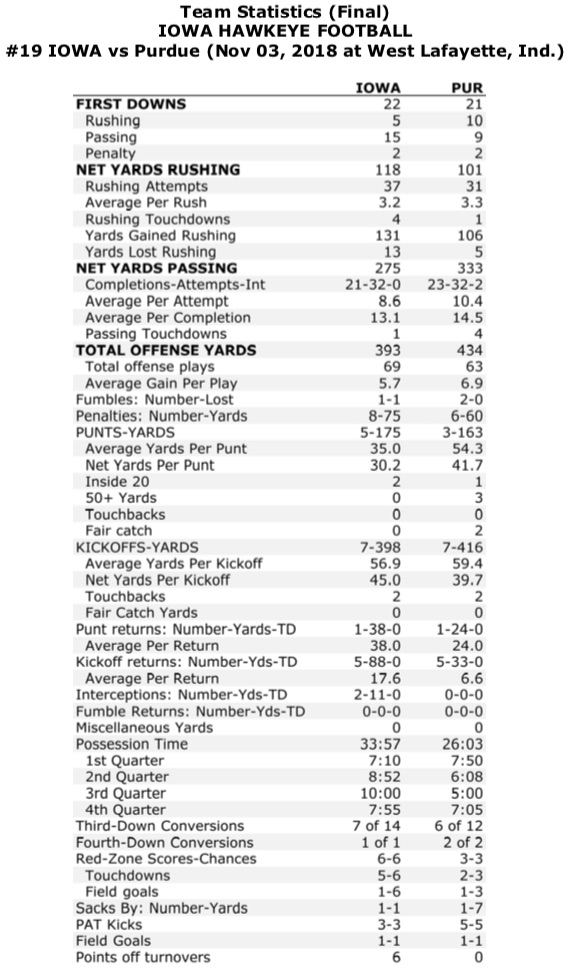