The Hawkeyes Mic picks are in for the Iowa – Northwestern game. It’s unanimous again. Check them out – see if you agree or disagree.

Having a bye week during the season was crucial when I played college football. There’s nothing better than taking a mental break from all of the pressures being a student athlete has to offer. Having said that, I know the Hawkeyes had some time off because my younger brother keeps me updated with their schedule and he was home for a couple days last weekend.

When a specialist has a couple days off and he doesn’t have to kick or punt, it can pay huge dividends for the following week of practice and game. Not only is it a big deal physically but it’s an even bigger deal mentally. You see, kickers and punters are different. We just are…weird. We do certain things before every play and say certain things in our heads before each kick. In short, we like to have a specific routine that fits our quirkiness. Being different and constantly trying to replicate the same exact play over and over again can be exhausting. Therefore, when we get a couple of days to not think about it we come back fresh and ready to smash the ball.

I know historically coach Ferentz always plays Northwestern closely and after last year he is due for a win in their house. Josh Jackson has done a great job with ball security this year and he will have a great match up with the Northwestern punter as he is a veteran who has a tall build with a strong leg.

Miguel continues to bang the ball in practice on field goals and kickoffs but it should be interesting to see how he does with playing on grass this weekend. Miguel is a great kicker and has a strong leg. One thing he does differently than others is his striking point on field goals with his foot. Since he has a shallow plant foot compared to others he strikes the ball with a lower part of his foot by turning his heel counter clockwise like a kickoff. This enables the ball to have more force behind it since he is using his quad muscle instead of his groin. That is easier to do on turf than it is grass because the ball lies higher off the ground. When you kick a ball using his approach off grass it’s like hitting a ball out of the sand trap in golf. You have to hit a bunch of sand before striking the ball with your club in order to get the ball up. This same analogy applies to hitting field goals off grass. Iowa no longer has a grass practice field so he can’t get a feel for how it will be this Saturday. If the grass is wet it will be an even bigger problem for him so let’s hope he can get a groove during pregame so he performs well during the game.

As for punting I hope Ryan Gersande gets a few more opportunities to get his feet wet so he can continue to build confidence as field position continues to be a huge aspect to producing wins in the Big Ten this year.

As always, thanks for having me on Hawkeyes Mic! Punting is winning!

There’s no Big Ten series more unpredictable than Iowa-Northwestern. I might have picked this game right once or twice over the last 10 years. Each time when I thought Iowa was the better team, the Wildcats have pulled the upset. Then when I think Northwestern should win, Iowa blows it out. It’s almost paralysis by analysis.

In looking at matchup, I think Iowa is a better run-stopping team than its statistics show. It really comes down to, can it be balanced? That means at least 100 yards rushing at about 4.0 yards per carry. If Iowa can hit that and not make any mistakes in the passing game, it wins. If not, it loses.

Did the Wildcats really get their act together last week at Maryland or was it a mirage? Banking on the latter here although there are plays to be made on both sides of the field here. The Hawkeyes’ ability to limit Justin Jackson and contain Clayton Thorson will ultimately decide this one in the fourth quarter.

This is one of the most even match-ups Iowa has this season. For me, it all depends on which team shows up for Northwestern. If the Wildcats from the Duke loss show up, Iowa could win easily. If the Wildcats from quarters 1, 2, & 4 from the Wisconsin game show up, Iowa will have its hands more than full. I think it will be a combination of things for Northwestern in this one and Iowa will have much of the same on its side. I look for Iowa to go heavy run with Wadley, who crushed NW two years ago in Evanston with 200+ on the ground and four scores.

Iowa’s been able to force turnovers this year and Thorson has been prone to toss picks. I see the Hawkeyes exploiting that and coming up big with a second half turnover to pull it out.

Pat Fitzgerald doesn’t like Iowa. In fact, hate could probably be used to describe his feelings toward the black & gold. Due to his dislike, this series has been even since he took over… Iowa took three straight from 2013 through 2015, but NW downed Iowa at Kinnick last year. I expect it to be tight & really could go either way. I’ll take Iowa because this prediction is on an Iowa-based platform and that’s what I’m supposed to do, right? 😉 kidding, of course. It should be a good football game. I’m looking forward to beautiful Fall day in Evanston.

Iowa has had an extra week to get healthy and prepare for the talented backfield of Northwestern. QB Clayton Thorson and RB Justin Jackson combine for seven years of starting experience for the Wildcats and are both capable playmakers. The Hawkeyes have used their bye week to put in extra time in the film room and on the practice field to hone their game plan against the two. The extra time off should also help the jumbled offensive line gain some cohesion to open holes for Akrum Wadley. The Hawkeyes go into Evanston and win a close one.

This series has certainly become one of the more intense played by Iowa Football. Close games for the most part make it very hard to predict with any high level of confidence. Both of these teams have faced some of the B1G’s top teams – and lost. Both are coming off important conference wins. NU’s Offense has been very explosive – at least in its three wins – and its Defense is playing the run particularly well. The Wildcats weakness this year is turnovers – they are minus-6 so far including nine INTs.

I think Iowa will get at least two picks against a very good NU QB this Saturday – and that Nate Stanley will pass the ball effectively to balance Iowa’s running attack led by Akrum Wadley. I also think Iowa’s Defense will “bend” a lot facing another dual-threat quarterback in Clayton Thorson and a terrific RB in Justin Jackson. The key then becomes how much it “bends” vs. how much it “breaks”.

I don’t believe either defense will shut down their opponent’s offense. It’s going to be a higher-scoring affair – that the Hawkeyes pull out in the fourth quarter. 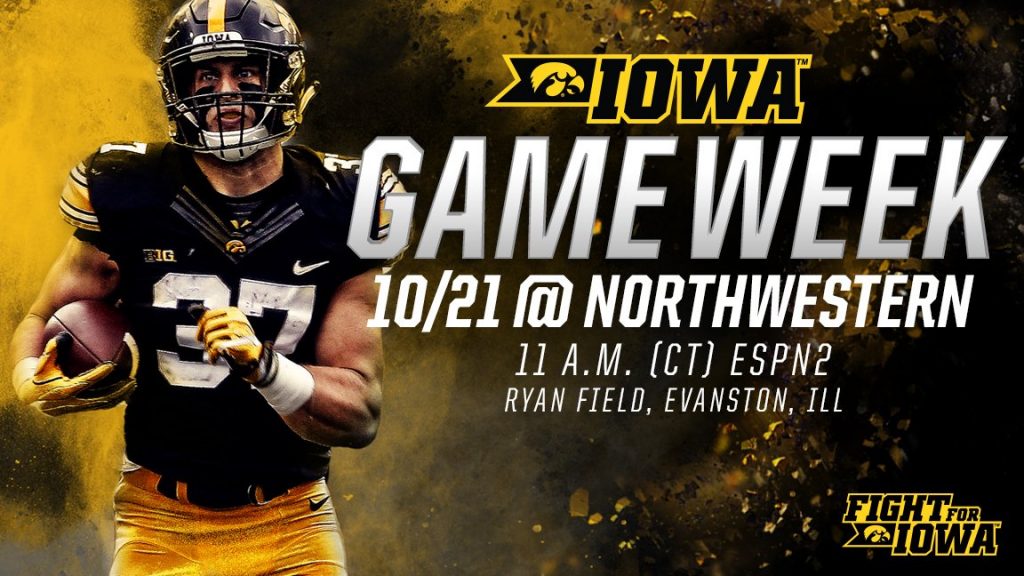