The Hawkeyes Mic picks are in for the Iowa – UNI game, including our guest prognosticator Jim Ecker. It’s unanimous with a high confidence level.  Check them out – see if you agree or disagree.

The Panthers have brought some very good teams to Kinnick over the years, but this does not appear to be one of them. Mark Farley is trying to settle on a No.1 QB after the Panthers lost their opener at Montana two weeks ago. Eli Dunne, the incumbent, struggled in the first half against Montana and was replaced by Colton Howell, who led a second-half comeback that fell short. Iowa’s defense has looked really strong in their two victories. Iowa’s deep and talented D-Line should rule the day against UNI, helping the offense get clicking as well.

This series normally is competitive with tough, hard-nosed kids on both sides. Those traits won’t fade because of Saturday, but I see a greater disparity among the teams than in recent years, especially along the line of scrimmage.

Kirk Ferentz won’t let it get too far out of hand, but I don’t think it’s close.

I expect Iowa’s offense to build off of its fourth-quarter scoring drive in last week’s win over Iowa State and I feel like they will attempt to build some confidence in the passing game, but with Wisconsin looming don’t look for the Hawkeyes to get too sexy in this one. With Ivory Kelly-Martin and Ihmir Smith-Marsette both likely sitting this one out to heal injuries, Iowa should be able to use the strength of its line play to grind out a solid win. I expect another strong defensive effort as the Hawkeyes finish unbeaten in the non-conference portion of the regular-season schedule for just the sixth time in Kirk Ferentz’s 20 seasons.

The offense gets rolling with Stanley finally finding his groove. I fully expect Iowa to play close to the vest early on offense, but eventually the flood gates will open. Stanley is too good of a QB to keep struggling to find his consistent rhythm. The running backs should have a chance to clear up the committee this week as well. It’s nice having three capable backs, but I think Young starts to separate himself from the other two eventually.

Nothing is easy in college football and Northern Iowa has given Ferentz and the Hawks trouble before, but I don’t anticipate much drama this weekend.

This game has serious shut out potential for the Iowa defense. Northern Iowa quarterback Eli Dunne got benched in the Panthers’ opener against Montana after completing 5-of-20 passes for 24 yards and an interception. Yowza. He’s still listed as the starter for this week. Northern Iowa’s two running backs, Trevor Allen and Marcus Weymiller, combined for 32 carries and 85 yards (2.7 YPC). With all due respect to Montana, Iowa’s defense is far superior. The Panther offense could be in for a long day.

It will be interesting to see how Iowa’s offense fares against a solid UNI defense, which compares similarly to Northern Illinois’. Iowa had two completely different halves against the Huskies two weeks ago, so keep an eye on how the Hawkeyes start offensively.

You have to appreciate what Mark Farley does at UNI – and the consistency of the Panthers Football Program. But this game is no “trap” for the Hawkeyes. Their Defense is just too good so far this season. UNI hasn’t identified its starting QB. It’s running game struggled mightily in the season opener. That’s not a formula for Offensive success vs. this Iowa Defense.

I think Kirk will not want the game to get too far out of hand – out of respect for Farley. But he may not be able to help that from happening. Farley didn’t sound too optimistic at his Monday Presser. For good reason. Iowa doesn’t open the Offensive playbook before the Big Ten Season starts next week. And it doesn’t have to. The Hawkeyes cruise and close out the non-conference season 3-0. 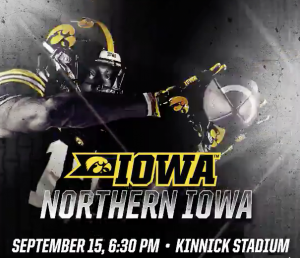