The Hawkeyes Mic picks are in for the Iowa – Penn State game. Some agonizing picks this week (well, at least one or two) – and it’s not unanimous. Check them out – see if you agree or disagree.

Night games at Kinnick Stadium often bring out the best in the Hawkeyes, but Penn State appears to be too strong for Iowa on both sides of the ball this early in the season. Trace McSorley and Saquon Barkley are two of the best players in the Big Ten and form a
formidable 1-2 punch, as the Hawks learned last year in Happy Valley.

Freshman tailbacks Toren Young and Ivory Kelly-Martin looked good for Iowa last week against North Texas in an emergency, but Penn State has allowed only one TD in three games and will be a much stiffer challenge. The Hawkeyes need a full game (and a healthy ankle) from Akrum Wadley to pull the upset.

With a schematic change and fresh blood on the outside, Iowa has enough offense to stay with Penn State this year. But I’m not sure the Hawkeyes can match the Nittany Lions score-for-score. Penn State has too many weapons and Iowa needs to play too perfectly to predict an upset. But if it happened, it wouldn’t be nearly as surprising as last year’s win against Michigan.

I don’t foresee a repeat of the forgettable performance in State College a year ago, but the experience and speed Penn State has at the skill positions is a difference maker against an Iowa secondary still looking to find an identity. Iowa’s front seven will create some issues, but not enough to totally negate the play-making abilities of Trace McSorley. I believe Iowa can keep it close, but adding to a string of five straight wins in Big Ten openers might be too much to ask of the Hawkeyes.

Penn State’s ability to wear teams down on the ground and tear the top off a defense, should be present Saturday Night at Kinnick. Iowa’s struggles to contain big plays against a good Iowa State wide receiving corps could rear their ugly head once again. If not, tackling the best running back in all of college football will be a challenge on its own.

I haven’t seen enough to think the “revenge” factor is enough for the Hawkeyes to overcome their weaknesses thus far.

Nate Stanley has look good at times and the long ball seems to be getting closer each week, but the Nittany Lions are a different animal than what Iowa’s faced so far. Akrum Wadley will need to be the x-factor and Penn State will do what it can to stop him first. If that plan is successful at all, Iowa will struggle mightily to move the ball.

Iowa’s been able to topple top 5 teams at Kinnick… not this year. Penn State gets one win closer to a B1G Championship and potentially the NCAA Playoff.

Bleacher Report’s lead NFL scout Matt Miller said recently that Saquon Barkley is the closest thing to Marshall Faulk he’s ever seen. Iowa gave up 95 yards and a touchdown on just 12 carries to North Texas’ Jeffery Wilson last week. How will the Hawkeyes perform with Marshall Faulk coming to town? It’ll have to be to the absolute best of their abilities.

There’s a lot to be said about Iowa under the Kinnick lights. The last four times the Hawkeyes have swarmed the field at night have all been memorable: the 57-yard field goal to beat Pittsburgh, the blackout win against Minnesota to give Iowa its first ever 10-0 start, the 42-3 beat down of Iowa State, and the upset of powerhouse Michigan.

But Penn State is a different beast, led by Barkley. Iowa’s linebackers don’t have the athleticism to cover him in space. Ditto for PSU’s tight end Mike Gesicki, who will be playing on Sundays next year. Quarterback Trace McSorley is the kind of dual-threat weapon that has given Iowa problems over the years. The Nittany Lions embarrassed Iowa 41-14 last year and have scored 33 or more points in ten straight games. I think that streak will still be intact as they leave Iowa City.

I began this week believing Penn State would not only beat the Hawkeyes but cover the early 12 point spread. By Tuesday I began to waver. Thursday I changed my mind (you may think I’ve lost it – but I digress).

Logic – and the stats – would dictate this should be a comfortable (not easy) Penn State win. Certainly on Offense they have three of the best play-makers in the nation: QB Trace McSorley, RB Saquon Barkley, and TE Mike Gesicki. They each have talents virtually no other team can simulate in practice. And it’s the kind of quick-strike, big-play offensive scheme that often gives Iowa fits. Then there was last year’s humiliating, blow-out loss at Happy Valley.

But…there are a few “buts” to consider, too. Brian Ferentz’s revamped Offense doesn’t look much like the offense Greg Davis ran. Opposing Defenses are not going to be able to load the box to stop Iowa’s running game – because if they do Nate Stanley and Company have shown they can make big pass plays. Iowa’s offensive depth at skill positions may be better than it’s been in several years. In the first three games Iowa has had several, long, time-consuming scoring drives – that have been balanced (pass-run).

Penn State’s Defense hasn’t really been tested yet this season. PSU’s three wins have all come against over-matched teams in Happy Valley. Kinnick Stadium is in Iowa City and this one’s under the lights.

Then there’s Iowa’s Defense which has been admittedly somewhat inconsistent so far – but has also done enough at critical moments to help keep the Hawkeyes undefeated going into Big Ten Play. Kirk and the players say “revenge” is not something they’re giving much thought to. But it’s also clear the Hawkeyes haven’t forgotten neither the game last season nor Barley’s comment afterwards that they “quit”. Let’s call it “payback” instead – and payback can be a bitch.

Neither one of these defenses is likely to stop the opposing offense – they can only hope to slow them down.

Sometimes the guy with the slingshot wins. I think this might be one of those times. 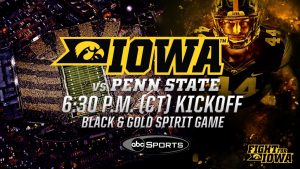