The Hawkeyes Mic picks are in for the Iowa – Indiana game. It’s unanimous again. Out guest prognosticator this week is Luke Meredith – AP’s Iowa Sports Reporter.  Check them out – see if you agree or disagree.

The Hawkeyes have yet to play a complete game, but that just might change in Bloomington. Iowa’s defensive line will again be the best unit on the field, and Nate Stanley and the passing attack should have their way with Indiana’s defense. Look for a big day out of Noah Fant, who has yet to have his breakout game of the season.

Peyton Ramsey is a gunslinger, capable of beating teams with his arm and feet. Ohio State turned him into a passer last week and while Indiana’s sophomore quarterback threw for 322 yards, that one-dimensional look left the Hoosiers on the short end a 49-26 score in Columbus. Expect Iowa to attempt to do the same against an Indiana offense which rushed for 84 yards against the Buckeyes. That’s an average day at the office for the Hawkeye defense. If Indiana becomes the fourth Iowa opponent to run for fewer than 100 yards, the Hawkeyes will win this game.

This game could see a number of field swaps because of turnovers, as both squads can force takeaways. On paper, Iowa is the better team when healthy, but the linebackers are banged up & the secondary is still very green with a good Indiana wide receiving core looming. It’ll be a close contest, but ultimately the push up front on both sides will favor Iowa on the road. If Stevie Scott has a big day breaking tackles, Iowa could be in trouble. The defensive lines success will be crucial.

Iowa’s offense has consistently improved and scored a season-high 48 points last week at Minnesota. Receivers Brandon Smith and Ihmir Smith-Marsette have hit their stride and seem to be more comfortable in the offense. The status of Noah Fant and Ivory Kelly-Martin will play a key role in this matchup. With the defense so banged up, the Hawkeye offense will have to outscore Indiana in Bloomington.

Indiana has the most takeaways in the B1G – and Head Coach Tom Allen emphasizes pressuring opposing QBs. The Hoosiers have 11 sacks. Iowa’s O-Line has been very good this season, allowing Nate Stanley to be sacked just five times. Something has to give. Stanley won’t be able to get away with the two key mistakes he made last week at Indiana either. On the other hand Iowa’s QB has been nearly great the last three games – the Hawkeyes tight ends have remained productive – and now the wide receivers seem to be emerging. The Hoosiers can’t rely on just stopping Iowa’s run game.

Iowa’s D has been very good all season. With its injuries, expect to see more of the hybrid 4-3 base we witnessed last week in Minneapolis. Indiana will get its points. But at the line of scrimmage – on both sides of the ball – Iowa is better. So I’m sticking with the Hawkeyes to pick up their second straight Big Ten Road Win. 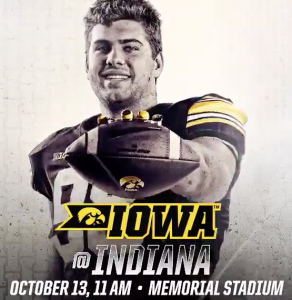