The Hawkeyes Mic picks are in for the Iowa – Boston College Pinstripe Bowl game. The Hawkeyes. The Eagles. Yankee Stadium. The Big Apple. It’s somewhat surprisingly not unanimous – but the prognosticated scores are relatively similar. Check them out – see if you agree or disagree.

As always, I will talk about what I know best and that is special teams. This game is going to be cold and we all know that the ball doesn’t travel far in the cold. Given windy conditions expect to see nothing but rugby style punts from Colten Rastetter. Regardless of the weather, I believe Colton will utilize rugby style punts for the entirety of the game because we can’t find a groove this season with traditional style punts. Boston College averaged less than Iowa did this season when it came to punting. Having said that, we should expect to see the field position battle to be won through kickoff returns and turnovers.

Miguel Recinos has done well on field goals this season with an 82%. His misses were from intermediate range of 30-40 yards. Miguel’s consistency this season towers over Boston College’s field goal percentage of 59%. If this game turns into a field goal match I would expect Boston College to miss before Miguel. Since we’re playing in Yankee’s stadium that leaves an issue for the field goal kickers if they have to make a kick from the infield that is covered with dirt instead of grass. If either team has to kick in the dirt I expect the kicker’s plant foot to slip causing them to push the ball wide right. Not being able to plant on actual grass can mess up everything from the snap, to the hold, and to the actual kick.

Our kickoff coverage has been phenomenal this year and Miguel has done a great job of getting touchbacks and placing the ball with great height. Both teams averaged 63.4 yards per kickoff this year and since both teams have excellent coverage there shouldn’t be a big return game. My prediction for the Pinstripe Bowl is a low scoring game due to the weather and strength of defense on both teams.

Thanks for having me on Hawkeyes Mic this season and I wish everyone a Merry Christmas and Happy New Year! Go Hawks!

I think Iowa finally gets the 5-year bowl monkey off its back. Boston College can match Iowa in multiple areas but have a porous run defense. While Iowa has struggled at times, the 300-yard effort at Nebraska showed the Hawkeyes they’re capable of establishing the run. If Iowa sticks with it, it will have success.

Birds of a similar feather, the Hawkeyes and Eagles are built to play the same game. Iowa’s skill and depth at tight end led by Noah Fant and TJ Hockenson and the leg strength of Miguel Recinos have a chance to make a difference at Yankee Stadium. If Nate Stanley can position the Hawkeyes for success, complemented by an effective final collegiate performance by Akrum Wadley, Iowa seniors will have a chance to secure their own legacy with a bowl win.

It’s no secret that Iowa hasn’t won a bowl game recently. It’s also no secret that the Hawkeye fans have little to no interest in traveling to a climate similar to Iowa’s to see a bowl game. This game might be eerie… when’s the last time you could say Iowa had a pathetic turn out for a game in late December/early January? Couple that with Boston College is much closer and the fans should be more willing to travel, it could be a nightmare trip to the Big Apple for Coach Ferentz and crew.

Boston College looks a lot like Iowa. Tough D that forces turnovers well. Offensively, they run first to set up the pass. Very Iowa. Very traditional. Whether that’s a positive or not, I’m not really sure, but practicing against a scout team with the same natural tendencies as your opponent should help both sides.

I’m picking Boston College based on trends… Iowa has been shaky down the stretch with a couple nice wins, but two pivotal games in which they might as well have just slept in. The Eagles have been white hot down the stretch, winning 5 of their final 6… the only loss coming to a pretty solid NC State squad on a 4th quarter TD. They’re finding things that click.

I see Iowa struggling early on offense since they’ve been sitting for a month, then finding it when it’s too late. They have to get Wadley as many touches in space as possible, & they’ve struggled with that late in the year. Nate Stanley could have a tough time against a stout pass defense in BC & the linebackers should be able to fill gaps with ease.

Boston College wins back-to-back bowls… One more bowl loss for Iowa. One more reason for the crazies to keep hollering for Ferentz’s head. I’m not sure about that, but with this bowl loss streak… maybe they’re starting to make more sense.

Boston College surrenders nearly 200 rushing yards per game to its opponents, so it’s not out of the question that Akrum Wadley gets the 216 yards he needs to check the 3,000-yard milestone off his list.

BC is down to their second-string quarterback, which makes running back AJ Dillon even more of a focal point than usual. Dillon is Boston College’s workhorse—he’s been fed 268 times this season and responded with 1,432 yards and 13 touchdowns. Dillon will give Iowa’s defense issues.

But I don’t think Dillon alone will be enough. Iowa has a major advantage at quarterback, a better defense, and I believe Wadley can equal out Dillon. Iowa’s five-year bowl skid ends in New York.

These two teams are similar in many respects – and both proclaim that they like to play tough, physical football. Both are also “developmental” programs whose head coaches wear that label proudly. The key stats across the board are fairly even – with but a couple of exceptions. And both like to define themselves – offensively and defensively – by running the football and stopping the other team from doing so.

The game is being played in a baseball stadium – so that part will be a little weird. It will essentially be a home game for BC because Iowa has sold very few tickets – and it’s unclear at this point how many “East Coast” Hawkeyes will actually show up in New York City. So if there’s a crowd advantage that goes to the Eagles, who finished the season in winning five of their last six and arguably come into the game with more momentum than Iowa (even though the Hawkeyes crushed Nebraska in the regular season finale).

I expect Iowa’s Defense to be its usual stout unit led by the stellar play of its two first team All-Americans MLB Josey Jewell and DB Josh Jackson. Iowa has shown in nearly every game the ability to slow down most opponents running games coupled with a defensive secondary that has been one of the pleasant surprises of the year. BC is missing its starting QB but boasts a plethora of receivers and an outstanding running back. Iowa counters with an Offense that has shown it can be really good – and sometimes really bad. The Hawkeyes are led by QB Nate Stanley and back-to-back 1000+ yards rusher Akrum Wadley (returning home for his college finale) and also prominently feature TE Noah Fant who had a break-out season.

The wildcard for this game from the Hawkeyes perspective is its Offensive Line which, once again, has been shuffled around – this time due to the suspension of LT Alaric Jackson. Tristan Wirfs moves to LT and Levi Paulsen gets just his second start at RT. BC has two excellent defensive ends who can wreak havoc in their opponents backfield. That matchup with be very important and Iowa’s two young tackles need to both protect Stanley and open holes for Wadley.

While BC can run the ball well – it has not been equally good at stopping the run – plus Iowa appears to have the edge in terms of field goal kicking. I think that combination of factors determines the outcome and the Hawkeyes…finally…break their bowl slump and bring home the Pinstripe Bowl Trophy. 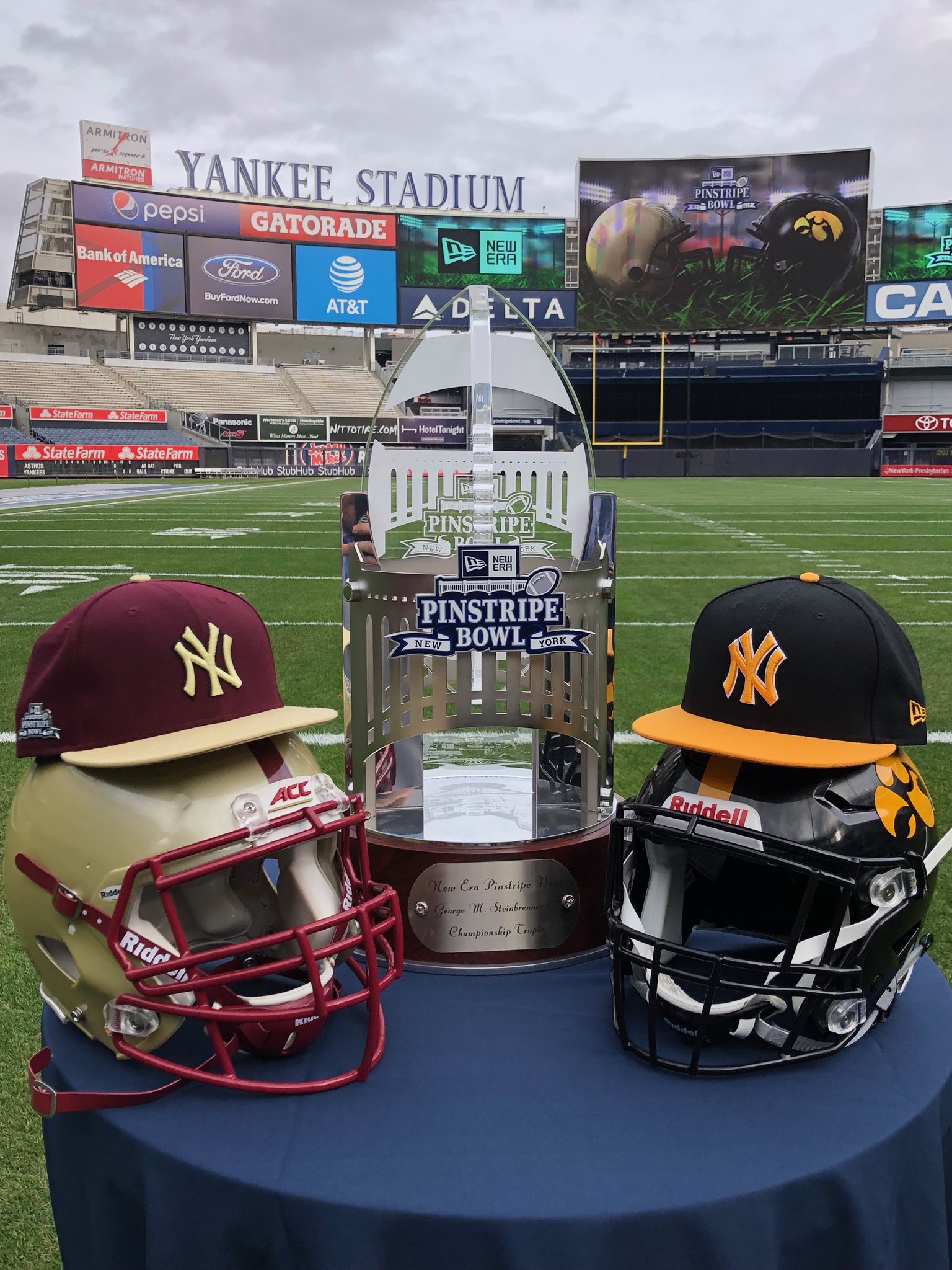