The Hawkeyes Mic picks are in for the Black Friday Iowa – Nebraska game. It’s not unanimous – in fact there are some sharp disagreements (between John and everyone else). Some of us have essentially given up on trying to guess which version of the Hawkeyes Team will actually make an appearance – like playing darts in the dark. Check them out – see if you agree or disagree.

Last week wasn’t what I thought is going to be against Purdue. They came in wanting the W a lot more so they can have a chance at going to a bowl game. This week should be interesting to see how Iowa bounces back with a shorter week of preparation. Nebraska hasn’t done anything special this year and at this point in the season they’re playing for their seniors and pride.

The weather is going to be in the high 40’s and low 50’s so it should be interesting to see if our punting game improves or stays the same. I have a feeling we will see more rugby punts out of Colton Rastetter but not when he is on the left hash. They will continue to do traditional style punts when he’s on the left hash because there is less room to roll out for a rugby style punt. I hope Colton learned from last game and watched the film thoroughly. I can see on television that he was picking his eyes up, causing him to drop his shoulders back, and pop his toe up at contact. If he keeps his eyes down this Friday we should see a huge improvement. But again this is not easy to do for young punters since they want to see themselves succeed.

Miguel continues to blast the ball on kickoffs through the end zone so despite the cold this Friday I am going to guess that he will continue the touchback streak. With the coverage team all over the ball it won’t matter anyway. On television last week I could see the ball fade right a little bit on Miguel’s field goals or extra points, which tells me that he is hitting the ball off of his toe instead of his big bone in his foot. He is also leaning away from the ball at contact and when you do that the ball will naturally fade to the right because your hips can’t catch up the swing and contact at the ball. If this isn’t fixed come game time he might miss a deep field goal wide right.

I have Iowa beating Nebraska 35-17. Thanks again for having me on Hawkeyes Mic!

Iowa has become the most unpredictable team in the country, and this version is is the most unpredictable under Kirk Ferentz. Iowa should blast Nebraska, which has one of the nation’s worst defenses. But if Iowa’s offense is stuck in neutral yet again, what then? It could be close, and that favors the underdog.

Although I picked Nebraska in our conversation, I’m going to reverse it. Iowa clearly is the better team. Can the Hawkeyes sustain their enthusiasm for a trophy game against a border rival, I believe they can.

The best cure for an ailing rushing attack is a hole-filled defense. The Hawkeyes should find plenty of room to run against a Nebraska defense that has struggled with tackling all season and has allowed an average of 289.2 rushing yards over its last six games. The arm of Tanner Lee and a solid group of receivers have the potential to give Iowa some issues, but probably not enough to overcome the deficiencies Bob Diaco is dealing with on defense.

For whatever reason Iowa hasn’t looked motivated the past two weeks on offense. The defense should play well against a weak Nebraska offense, but I anticipate the offense sputtering once again. Normally I would say Iowa would win by a larger margin, but Nebraska should be motivated in this one as Iowa has pushed them around in the Heroes Trophy series as of late, winning three of the last four including a beat down of epic proportion last year at Kinnick.

Plan on a lot of punting and potentially a defensive touchdown. Iowa limps into a 7-5 season record and an actual shot at a bowl victory in tropical New York City. I’m really only confident about one thing here… Mike Riley will be searching for a new job come Monday.

I have no idea how to pick this game. I wouldn’t be surprised to see Iowa lay another egg. I could also see the Hawkeyes coming out with a fire lit under them, anxious to prove they’re a different team than the last two weeks have shown.

Iowa’s offense should benefit from Nebraska’s nonexistent rush defense, and ButWad should be in for a big day in the regular season finale. The Hawkeye defense could also play a major factor.

Nebraska’s Tanner Lee loves to throw the ball to the other team. Josh Jackson is always a threat to make a play and could make a push for the Thorpe with another big week against the Huskers.

This game has all the potential to be a titanic matchup: the Hawkeyes’ utterly inept and unproductive Offense vs. Nebraska’s pathetic and hapless Defense. But I use the term “titanic” very loosely and with tongue firmly planted in cheek. I very much suspect Fox Sports wishes it wasn’t stuck with this dog of a game on Black Friday Afternoon Primetime. But it is – and so are we…

I’m going with Nebraska primarily because I’m now to the point where Iowa’s Offense has to prove itself to me before I will again place any faith in it. As bad as Nebraska’s Defense has been this season, it is a “3-4” – and that’s the scheme that has given Iowa fits the past two weeks at Wisconsin and vs. Purdue. Iowa’s O-Line brain trust seems clueless in terms of solving relentless blitzing. Expect that from the Cornhuskers this Friday – and expect Iowa to be largely unable to counter it once again.

On the other hand, Nebraska has a very productive Offense for the most part with a QB who can sling it around to several talented receivers. If Amani Hooker is back, it will bolster Iowa’s Defensive Secondary – but even he and Josh Jackson can’t do it alone. With squat from Iowa’s Offense coupled with its D spending most of the afternoon on the field, I don’t see why we shouldn’t expect the same kind of results we have seen the past two games.

Then there’s Iowa’s punting game – kicking and receiving. Complete yuck at this point and coaches too stubborn to make changes – like making Nate Stanley the starting punter for the next two games.

IF Iowa has a chance, it has to uncork its running game. The good news there is that the Cornhuskers run defense is pathetic. So maybe…

Iowa loses and gets one of the B1G’s poorest bowl slottings – which is precisely what it will deserve at 6-6. And the fans will grow even more restless with Ferentz Fatigue. Nebby isn’t bowl-eligible, so this is essentially its “bowl” game and they want that Heroes Trophy back – and who knows, maybe the win will let Mike Riley live for another year in Lincoln. 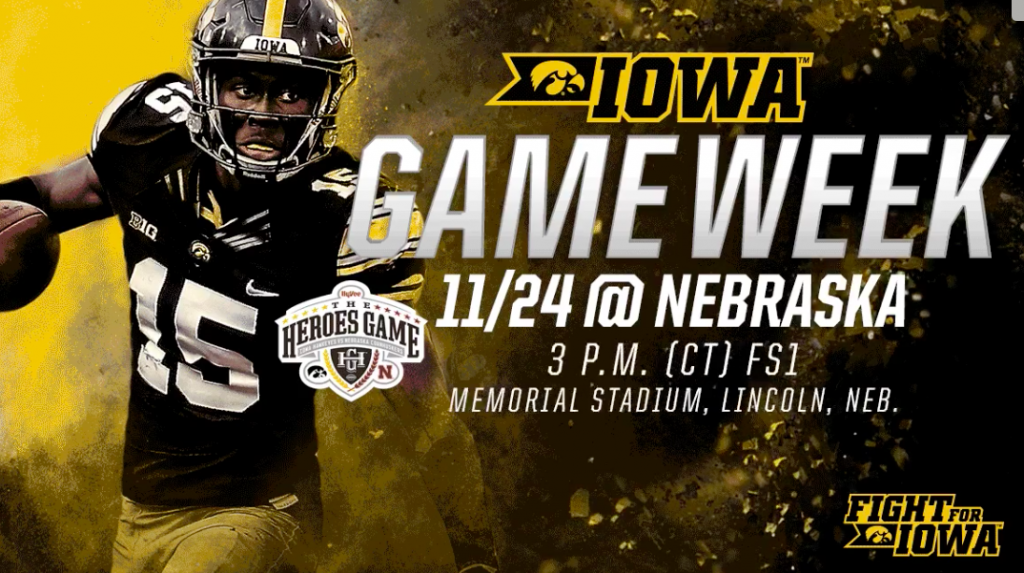