The Hawkeyes Mic picks are in for the Iowa – Purdue game. It’s getting harder to predict what the Hawkeyes are going to do, especially on Offense, with each passing week – but for what it’s worth it is unanimous this time. Check them out – see if you agree or disagree.

“It was great to see my buddy Josh Jackson do well once again last week against Wisconsin but my selfish needs wanted to see more dominating in the Punting game. I told you before the wind and cold would have an effect on our kicking game and it will happen again this week. Colton’s average last week was pretty good if you just look at his rugby punts. He can’t seem to find a groove with his traditional style punts and now that we’re this late in the season we should see Iowa consistently try to rugby punt the ball. This seems to be the most effective way to get the ball down field. Miguel didn’t have any opportunities to come in clutch last week for the Hawkeyes and watching him under pressure is one of my favorite things to see in the game. He’s very poised and should put up some points this weekend against Purdue if we move the ball on offense.

Purdue is starting to turn their program around and I strongly believe they’re going to come fired up against Iowa in Kinnick Stadium. Playing in that stadium can motivate or break a team down and Purdue feeds off of hard smash mouth football so we should see a good game.

Kickoffs continue to be interesting to watch as the season goes on because Miguel can’t find the end zone going into the wind. This is forcing him to place the ball in either corner with great hang time. Miguel has done such a great job on kickoffs by allowing our coverage to get down field and make a tackle inside the 20 I would be surprised if we weren’t top five in the Big Ten.

Something tells me that this is going to be a close game and that Purdue will need to do an onside kick at some point. Trickery seems to be continuous in the Big Ten this year and I believe Purdue is going to use a double kicker onside formally known as Houdini. This type of onside has two kickers on the field instead of one and when it comes time to kick the ball each kicker moves toward the ball forcing the defense to stay even and not shift their coverage to one side. Doing so allows either kicker to give a go call to their coverage side where the ball is going to be kicked. If Iowa doesn’t see it coming we could have a repeat of the Central Michigan University vs. Iowa showdown that we had in 2012. Yes, I was at that game and no I didn’t kick that game winning field goal.

Coluzzi Kicking has found their next sponsor in MULE (Most Unreal Lifting Experience) as they manufacture clothing and lifting products. If you wish to represent a Coluzzi Kicking hat or shirt you can do so by going on my website at www.coluzzikicking.com and purchase one online.

This game has the potential to be tricky for Iowa. Purdue’s defense is superior to its most recent porous versions. The Boilermakers have cut their points per game from 38 to 19, allow more than 1.5 yards less per carry and have cut rushing touchdowns from 35 to 9. It’s pretty impressive.

But can a backup Purdue quarterback move the ball consistently against the Hawkeyes? Maybe a few times but not enough to win.

Purdue’s defense hasn’t allowed more than two touchdowns in any of its last six games. That changes this week. The Hawkeyes get things going on the ground in Akrum Wadley and James Butler’s final run through Kinnick Stadium, a place where Iowa’s offense has been sufficient this season. The Hawkeye defense will have its hands full with pass-happy Purdue, but helps craft a bounce-back win in the home finale.

Purdue plays good defense. Nothing like Wisconsin’s, but good nonetheless. It’s Senior day, so naturally emotions will be running high. Expect a big day from Iowa’s Senior running back tandem to possibly set up the pass. I think I’ve written that every week. Snort. Iowa should get to 7 wins easily & look forward to the Black Friday trip to Lincoln with confidence. It’s been a roller coaster of a year and they’ll head back up the tracks this week… sets up for a great chance at 8 wins.

Purdue hasn’t played good football the last month. They’ve lost to Rutgers, Nebraska, and Northwestern, which isn’t necessarily a murderer’s row of opponents. Purdue’s only win came against Illinois, who is 0-7 in the Big Ten. Suffice it to say that Purdue is bad. They’re especially bad without quarterback David Blough, who will miss the rest of the year after undergoing ankle surgery.

Iowa is a significantly better team at home. A competitive game against Penn State and a thrashing of Ohio State are enough to prove that, especially when contrasted with the lambasting the Hawkeyes took in Madison last week.

It’s also Senior Day. I think Iowa comes out aggressive and sharp offensively, a stark contrast from the Wisconsin disaster. The Hawkeyes need to hit a big play or sustain the opening drive to get the fans involved.

I was going to pick Iowa 24-17 but Steve Batterson (and others) have already used that score. So even though I think that might be closer to the actual finish, I’ll go with 24-13 (Jack Brandsgard has this same score but I wrote my piece first, so I’m not backing off – otherwise all of the “good” scores will be taken and I’ll be left with nothing).

It’s Senior Day and while sometimes that makes players a bit overwrought and emotional playing their last game in their home stadium, it can also be a big motivator. I think that’s what happens Saturday for Akrum Wadley and James Butler. Despite Purdue’s improved defense, Iowa’s Offense – if it’s clicking – can pass the ball with QB Nate Stanley and should run the ball with zeal in this game with ButWad on the point.

The weather is supposed to be very Novemberish – and not in a good way with cold temps and high gusting winds – so the running game will probably be more important than normal for both teams. That should favor Iowa. Purdue’s D has been most stout recently in the 4th Quarter – but that’s Iowa’s strongest offensive period the entire season. Something gives there and I think Iowa will put a dent in that Boilers stat.

PU’s D is impressively improved. But it’s not Wisconsin’s Defense either. Iowa wins its 7th game and goes into Black Friday with some momentum. 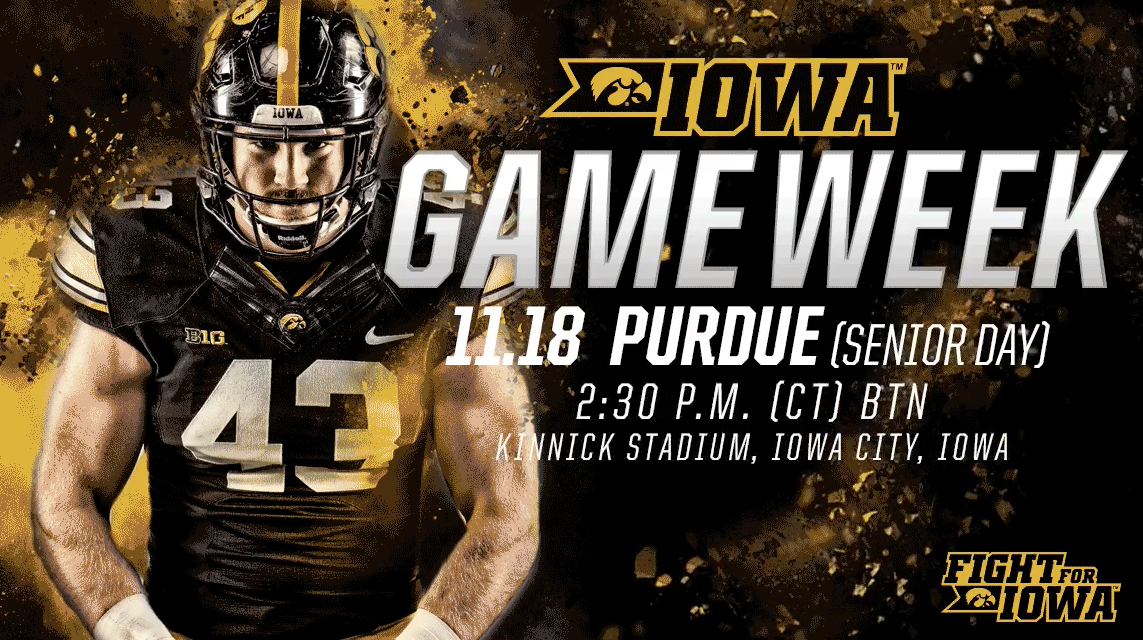