The Hawkeyes Mic picks are in for the Iowa – Wisconsin game. This week is a split decision – and probably for good reason as this one is hard to pick. Check them out – see if you agree or disagree.

Iowa and Wisconsin traditionally go after one another like two lumberjacks battling for the last can of Pabst Blue Ribbon, and that won’t change this weekend. The Hawkeyes are capable of winning, but at the surface level, they have too many deficiencies.

Given the quality of both defenses, expect a lot of tire spinning on the turf at Camp Randall Stadium. It may be a challenge for either offense to gain much traction in the battle between the Big Ten West Division heavyweights.

Wisconsin has had two weeks to steam over the beating it took at Ohio State and Iowa has had a couple of weeks to mull its offensive frustration in the shutout of Northwestern. This has the look of another hard-hitting battle where turnovers loom large. Badgers by a couple on a late score.

Two of the nation’s best scoring defenses facing off. It’s going to be all about field position.

Simply put, the Badgers have the best defense Iowa will face all season, the Hawkeyes are inconsistent at best offensively, and the only way I see Iowa having any shot of winning is if it wins a low-scoring game, a la 2015.

I feel like at some point, Wisconsin’s OL will eventually wear the Iowa defense down and Jonathan Taylor ends up breaking a couple of big runs to make the difference for the Badgers in this game.

As much as I’d like to pick Iowa – the offense is just too inconsistent, bordering on mediocre when playing good defenses (or any defenses for that matter). And that’s what the Hawkeyes will face this weekend in Madison. Both defenses are great – literally – among the best in the nation. But if Iowa’s Offense can’t stay on the field and get at least some points, the Hawkeyes Defense will be left hanging out to dry. Don’t forget, the Badgers lead the nation in time of possession.

I’m not saying Iowa can’t win — just saying I don’t have enough faith in its offense. Prove it to me, and I’ll go with the Hawkeyes the rest of the season. If the Defense can score some points – and Keith Duncan can make a difference… Oh well, I digress.

Iowa gets eliminated from contention for the B1G West Title, fails to reclaim the Heartland Trophy, and faces an uncertain future with the remaining teams on its schedule – any of which appear capable of beating the Hawkeyes at this point. If that happens, it’s really unfortunate – because it will mean it squandered one of the best defenses in program history.

It’s a must win game for both teams. Iowa’s shown a little life since dropping two and looking bad against Purdue, but Wisconsin is a different animal… even after losing to Illinois and getting drubbed by the #1 team in the country.

If the game were in Iowa City, I would take Iowa. It’s not, so I’ll take the Badgers in a tight one.

I’m picking the Hawkeyes to fare better than the last time they traveled to Madison, but I don’t think it will be enough.

Kirk Ferentz says Jonathan Taylor is a top-three running back Iowa has ever faced – up there with Saquon Barkley and Christian McCaffrey. That is high praise, and it’s especially noteworthy given this next stat, courtesy of Scott Dochterman:

In 14 of the last 15 Iowa-Wisconsin matchups, the team that won the rushing battle went on to win the game.

The Badgers have an elite talent carrying the rock behind a road-grating offensive line. I think Iowa’s interior offensive line struggles bite them in Madison. 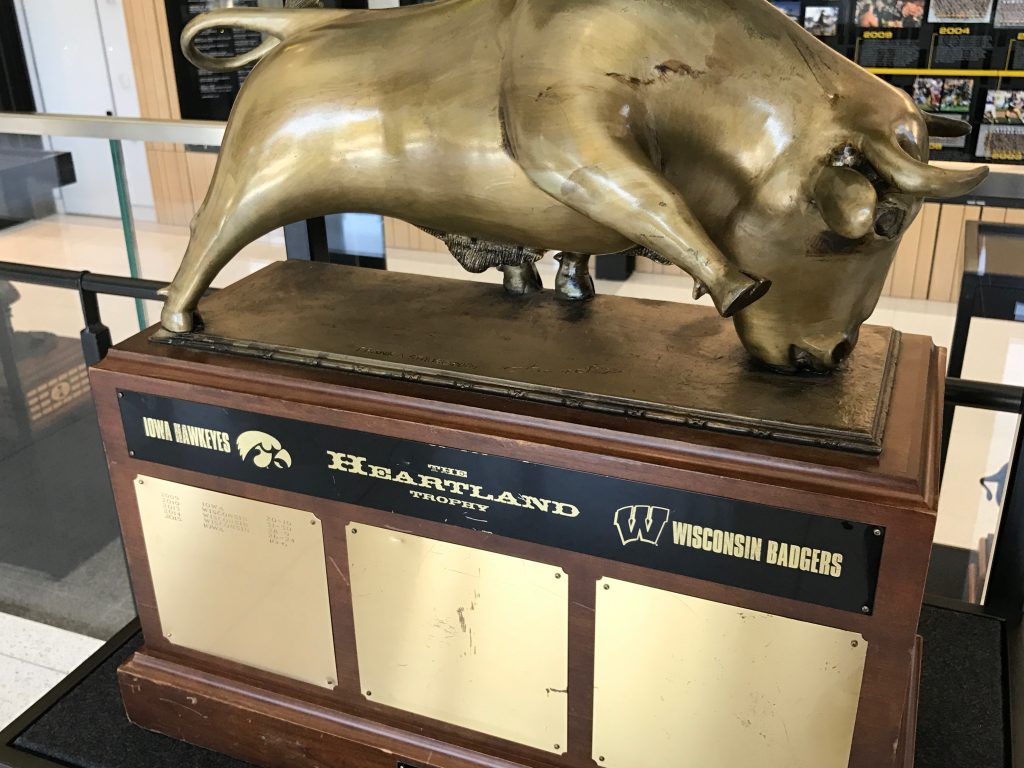