The Hawkeyes Mic picks are in for the Iowa – Wisconsin game. It’s not unanimous – we have one outlier. Check them out – see if you agree or disagree.

IOWA putting up big numbers against OH-NO State! Last week was a big win and it was nice to see the offense unleash some crazy stuff we haven’t seen this year. Also, how about that defense? Not a lot of people know this but Josh Jackson is really good at ping pong and I would play him late at night some evenings last year when he would take a break from watching film on his own. Josh deserves every bit of success he has had this year solely on the time he put in last year as a back-up. I also love the fact that he is humble about everything. He’s a first class act all the way around. Okay back to business…

This week seems to be the talk of trick plays on special teams and how Iowa keeps pulling something out of their hat that we didn’t even know existed. Truth is I love it! How often does the kicker or punter get to be the hero? Let alone the long snapper!!! Colton should punt this Saturday and after last week he should have laser focus in producing some big punts to help out the team. My prediction is 44 yard average against Wisconsin with manly producing rugby punts. The weather is going to be cold and windy so rugby punts should be their go to move and Colton is the best at it.

When it comes to field goals, Miguel continues to hit the ball well and he should have a couple of opportunities if Stanley moves the ball like he did last Saturday. He doesn’t seem to get rattled when he plays on the road so if the wind isn’t too bad we should see him split the uprights a couple of times. My guess is if they’re in a pinch and need to put up six instead of three you will see another fake field goal. The defense has to be aligned properly but if Colton gives the green light as the holder we should see another one this week.

Kickoffs are continuing to be our best special teams performance and that’s because our coverage is phenomenal. Since it’s cold out we’re seeing less touchbacks, which is normal. However, if Miguel continues to place the ball in the right spot it won’t matter. Our kickoff coverage team finds the ball faster than my dog catching a squirrel in the backyard.

We know what to expect from these two teams. It’s going to be another physical fistfight where the game is won at the line of scrimmage. Wisconsin likely struggles to pass without its top two receivers and Iowa might struggle to run unless its passing game gets on track. I don’t think this game is decided until the final seconds or possibly overtime.

It won’t be much to look at, but it rarely is when the Hawkeyes and Badgers meet. I expect a terrific defensive game that will be decided late in the fourth quarter. Wisconsin survives its toughest test of an unbeaten season so far, in large part because of the play of Jonathan Taylor and the work of its offensive line.

Iowa could be due for a hangover game after the shellacking it put on Ohio State last week, but I think they’ve “turned the corner.” I hate that phrase, but it works for this young Iowa team as it matures through the ups and downs of this season. Wisconsin’s narrative this year is identical to Iowa’s in 2015, but I’m not sold on Wisconsin as a whole team yet. Hornibrook is wild with his decision making and has thrown at least one interception in each of his last six games. That bodes well for an Iowa team that just forced one of the most consistent passers in Ohio State’s J.T. Barrett to toss four picks. Josh Jackson is proving to be an elite defensive back and if Hornibrook attempts anything his way, it could be disaster. Wisconsin’s mediocre passing offense will already be behind the eight ball with leading receiver Quintez Cephus out as well.

On the defensive side of the ball the Badgers are without Chris Orr and possibly D’Cota Dixon. Don’t look now, but Nate Stanley is putting up near-elite numbers as the signal caller for Iowa’s offense. Iowa probably won’t be able to run the ball with much success and becoming one-dimensional could be a problem, but if the offensive line can get the kind of push it did against the Buckeyes, Stanley will have plenty of time to make good reads and make accurate throws as he did a week ago.

The overall even-nature of this series is well documented, but Wisconsin has won four of the last five with the only Hawkeye victory coming in Mad Town in 2015, 10-6. They’ve all been close and I see this one going the way of the Hawkeyes. Sorry B1G, but no College Football Playoff for you.

Iowa is a difficult team to predict because the same team that scored 10 points in an overtime loss to Northwestern before mustering only 17 points against Minnesota is the same one that hung 55 on THE Ohio State University. With that said, I’m picking the upset this week.

Wisconsin has yet to face a real challenge—their closest game was a 17-9 “classic Big Ten football game” against Purdue. On the other hand, Wisconsin will be the third top-five opponent Iowa has faced this season. I think Iowa’s big-game experience nullifies Wisconsin’s home-field advantage.

So then it comes down to who is simply the better football team, and Wisconsin isn’t fighting at full strength. The Badgers will be without leading receiver Quintez Cephus for the rest of the year, and fellow receiver Jazz Peavy will also miss the Iowa game. I’ve never been a big fan of Wisconsin QB Alex Hornibrook, and the loss of two receivers won’t help his case.

To make matters worse, Hornibrook will have to avoid Josh Jackson’s side of the field completely. Wisconsin’s neutered passing game will allow the Hawkeyes to load up on the run game in an effort to stop the Badgers’ star running back Jonathan Taylor.

Jack Cichy, a key cog for Wisconsin’s defense, will join Cephus on the sidelines for the rest of the year, making it easier for Akrum Wadley to find space on the ground. Nate Stanley will have something to prove in his return to his home state, looking to build off of the best game of his young career that came a week ago.

I think the chips are falling just right for the Hawkeyes, who I expect to come out of Madison with an important win.

We’re kind of all over the place in terms of predicting the score in this one – and it’s a hard game to predict. Iowa will be the first ranked team Wisconsin has played all season. They are a good team – but just how good against quality opposition? Iowa looks like everything finally gelled last week with the huge upset of Ohio State – the best game in all three phases the Hawkeyes have played this year. But which version of Iowa – especially the Offense – will show up at Camp Randall Stadium?

The Badgers have been hurt by a slew of injuries and are missing several starters on both sides of the ball this weekend. I think Nate Stanley’s passing will be enough to get the win for the Hawkeyes. I also think Iowa will make Wisconsin one-dimensional on Offense. Those things should be enough to let Iowa ride the bus home back to Iowa City with a 7-3, 4-3 record and the Heartland Trophy in tow. Which will also completely eliminate any chances for the B1G to participate in the College Football Playoffs. 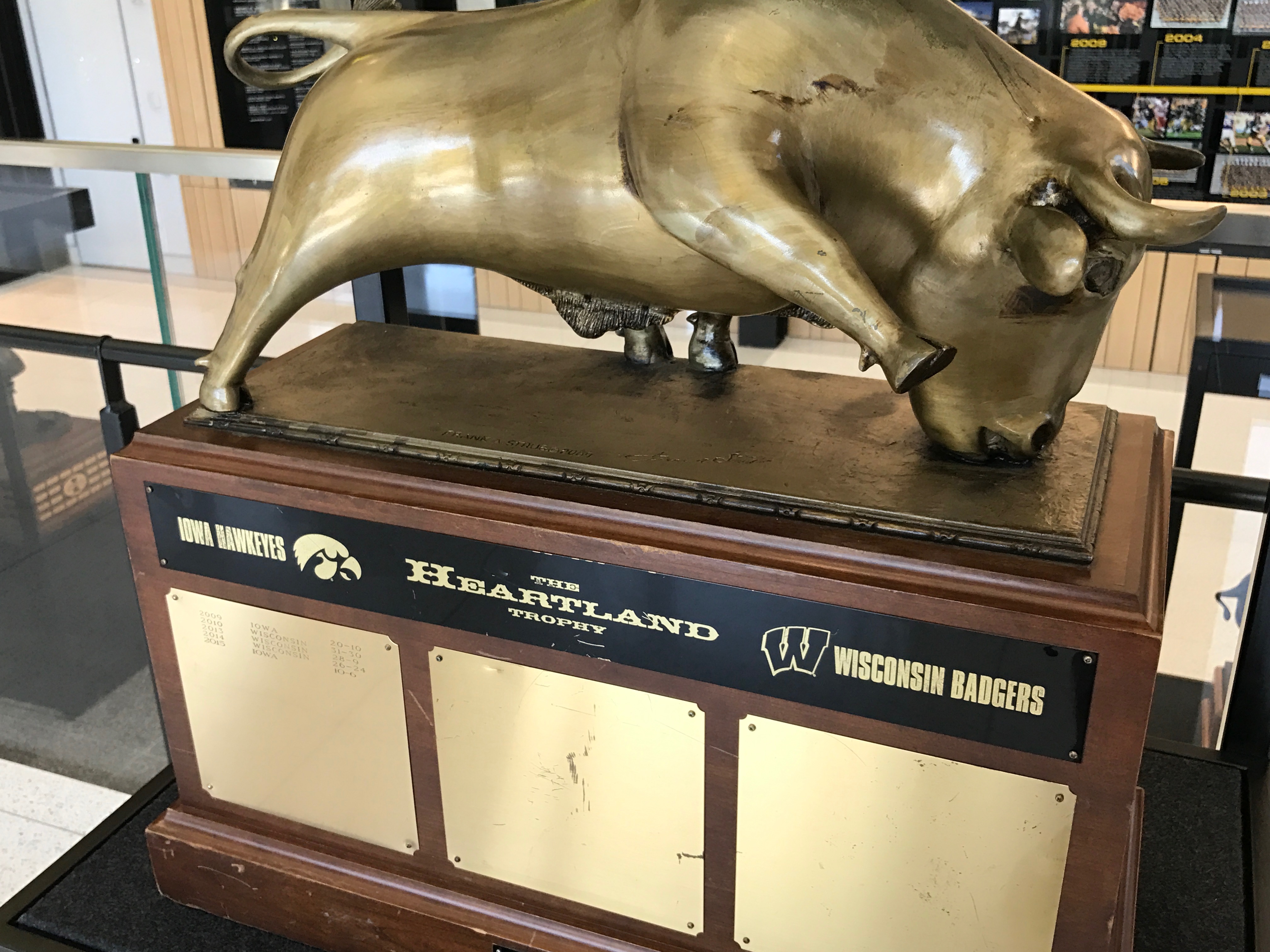