The first break of the game came immediately and went in Iowa’s favor when Jake Gervase fielded a tipped pass and returned it to BC’s six yard line. The Hawkeyes went shotgun all three plays, threw a fade to Shaun Beyer, and stalled out, eventually settling for a Miguel Recinos chip-shot.

The Eagles ran right down Iowa’s throat on the ensuing drive, with 240-pound bruiser AJ Dillon steamrolling his way to the end zone to cap a 14-play, 62-yard drive. The Hawkeyes had the Eagles where they wanted them a few times but failed to get off the field. Boston College picked up two third down conversions and a fourth down try to keep their drive alive.

Akrum Wadley, the star of the day for Iowa, took the following kickoff 72 yards down to Boston College’s 16 yard line. After a bogus unsportsmanlike conduct penalty saved Iowa from a sack, the Hawkeyes took advantage with a touchdown pass to Noah Fant.

After the questionable start, Offensive Coordinator Brian Ferentz dialed up a beauty for Iowa’s first touchdown. Out of shotgun, Stanley faked a handoff as Fant came across the formation. Boston College’s linebackers bit on the play-action, leaving Fant open to stroll into the end zone untouched. Iowa retook the lead, 10-7.

Boston College again had an answer. Amani Hooker had flashbacks to the Penn State game when he came up just short of successfully batting a pass. Hooker got a fingertip on a ball, but it ended up in Tight End Tom Sweeney’s hands for a for a another BC touchdown.

Iowa fans were also upset with Colten Rastetter’s poor punts. After Stanley pooched a ball inside the five yard line, calls to #LetStanleyPunt ran amuck on Twitter. AJ Dillon broke loose for a 66-yard burst to set up a Boston College field goal, giving the Eagles a 17-10 lead.

BC’s kicker blew an easy field goal, so it didn’t cost the Hawkeyes, but it was a completely unnecessary situation created by a stalled-out offense and a mediocre punter. Iowa should have felt lucky to jog into the Yankee Stadium locker room only down by seven.

True to form, Iowa proved to be a completely different team in the second half than the one that showed up in the first. Nate Stanley connected with Nick Easley on a 32-yard gain that set up an Akrum Wadley rushing touchdown. 17 all—brand new ball game.

Anthony Nelson delivered with a swift outside rush, using his 6’8” frame to poke the ball loose from the hands of Boston College’s QB Darius Wade. Parker Hesse pounced on the fumble and the Hawkeyes were in business in the Eagle’s territory.

Wadley exploded to the BC’s 18 yard line on the next play, and TE Nate Wieting took his first career catch to the half yard line before FB Drake Kulick gave the Hawkeyes the lead for good on a fullback dive. 27-20, Iowa, 3:09 to play.

As it was asked to do all year, the Iowa defense needed to hold serve. The unit turned to All-American Cornerback Josh Jackson, who secured his Iowa record-tying and FBS-best eighth interception of the season to lock-down the game. It was only right that the defense, which carried Iowa throughout much of the season, came up with the two decisive plays down the stretch. With Gervase and Jackson’s interceptions, Iowa finished the season tops in the FBS with 21 picks.

While the Hawkeyes had no turnovers in this game, it forced three critical Boston College turnovers – which resulted in 10 points for Iowa – the difference in the game.

Successfully running the football is always a key for Iowa’s Offense. Since the start of the 2015 season, the Hawkeyes record when rushing for 100 or more yards in a game is now 28-1 vs. 0-11 when not. This season alone, Iowa is 8-0 when running for 100 yards or more and 0-5 when failing to achieve that mark. In this game, Iowa had 101 yards on the ground and 99 passing. That’s only 200 yards of total offense but it was enough to garner the win.

Akrum Wadley was named the Pinstripe Bowl MVP – in his last game as a Hawkeye – and boy did he deserve it: 283 all-purpose yards, 88 rushing yards and one TD, 24 receiving yards, and a whopping 171 kickoff return yards (an Iowa record in a bowl game).

Quarterback Nate Stanley played far from his best game of the season – but he hit some very big and critically important passes in the crunch. He finished 8-15 for 99 yards and one touchdown. The most important completions were to Tight End Noah Fant on an eight yard TD (Fant’s 11th touchdown reception this season), 32 yards to Wide Receiver Nick Easley that set up Wadley’s five yard rushing TD, and then the icing on the cake – a 17 yard toss to Tight End Nate Weiting to the half yard line that led to Fullback Drake Kulick’s plunge for the winning score.

Given the terrible field surface conditions, coupled with the icy-cold weather, Place Kicker Miguel Recinos was perfect on the night – and every one of his points were big. Recinos has been a pleasant surprise in his first season as the starter. In this game he was 3-3 on PATs and 2-2 kicking field goals. If only Iowa had a punter – but that’s a problem the coaching staff will need to solve in 2018.

The win snaps Iowa’s five-game bowl skid and gives Kirk Ferentz his 143rd win, tying the legendary Hayden Fry for the Iowa record as the winningest head football coach. The Hawkeyes finish the year 8-5. The off-season will seem much shorter than it would have with a sixth consecutive bowl loss. It’s a critical win for this program and provides much-needed momentum heading into 2018.

RB Akrum Wadley was named Pinstripe Bowl MVP. He had an Iowa bowl record 171 kickoff return yards. The previous record was held by C.J. Jones (169 vs. USC, 2003 Orange Bowl). His 72-yard KO return at the end of the first quarter was a career-long.

FS Jake Gervase recorded an interception, his third of the season, on Boston College’s first drive of the game. Iowa leads the NCAA with 21 INTs.

LB Josey Jewell had 11 tackles today. He has 22 career games with double-digit tackles, including nine this season.

TE Noah Fant caught an 8-yard TD reception, his team-high 11th of the season. The 11 TDs are a single-season record for an Iowa tight end. Mike Flagg holds the career record with 13. Fant’s 11 touchdowns are the most by a Hawkeye since Marvin McNutt caught 12 touchdown passes in 2012.

WR Matt VandeBerg played in his 54th career game, more than any other player in school history. VandeBerg ended his career having at least one reception in 32 consecutive games played.

DE Anthony Nelson’s fourth quarter sack was his seventh of the season, a single-season career best (6 in 2016). The sack forced a fumble (recovered by Parker Hesse), setting up Iowa’s game-winning touchdown. Hesse and Nelson teamed for a sack on Boston College’s final drive of the game.

DE Nathan Bazata recorded a career-high nine tackles in his final game as a Hawkeye. Freshman Matt Hankins had a career-best seven tackles.

Today’s game time temperature (23 degrees) at kickoff was the coldest for an Iowa game since 2013 vs. Michigan (18 degrees).

The Hawkeyes host Northern Illinois in the 2018 season opener on Sept. 1. 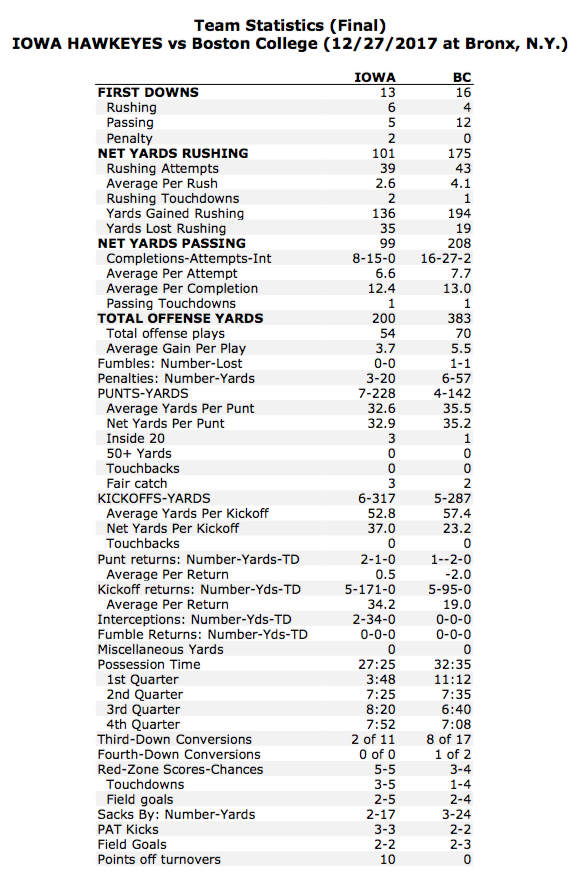 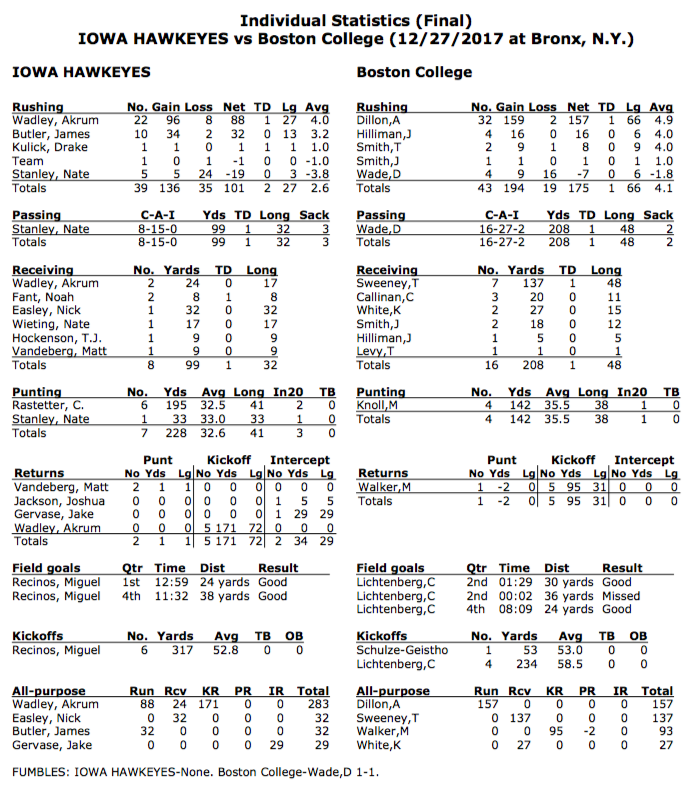