The Iowa – Northwestern Game is in the books. The Hawkeyes lost in overtime 17-10 at Ryan Field in Evanston last Saturday. It’s time to grade that final exam…

Iowa’s Offense was about as bad as it’s been all season. Let me re-phrase that, given the opponent, the offense was the worst it’s been all season. 10 points in regulation. Really? That’s inexcusable – especially coming out of the bye week where the talk from coaches and players was about improving the rush. The individual grades below are higher but the collective effort deserved at least this, and maybe I’m being too generous.

Iowa’s Defense only surrendered 10 points in regulation. You should win almost every single game you play if you only give up 10 points. I can come out of retirement, reactivate my law license, and we can sue the offense for lack of support. The Wildcats have a potentially very explosive offense. The Defense did just about everything it needed to – and it did it without injured key starters Josey Jewell and Brandon Snyder

This is split three ways: LB Bo Bower (11) and LB Kevin Ward (4) who both had career-high tackles and DT Nathan Bazata who had a career-high 1.5 sacks.

There’s only one choice – if for no other reason than process of elimination. But  Defensive Coordinator Phil Parker earns this for constructing the Defense that held NU to just 10 points in regulation. Iowa coulda, shoulda, oughta won if the Offense even made more than a token appearance. 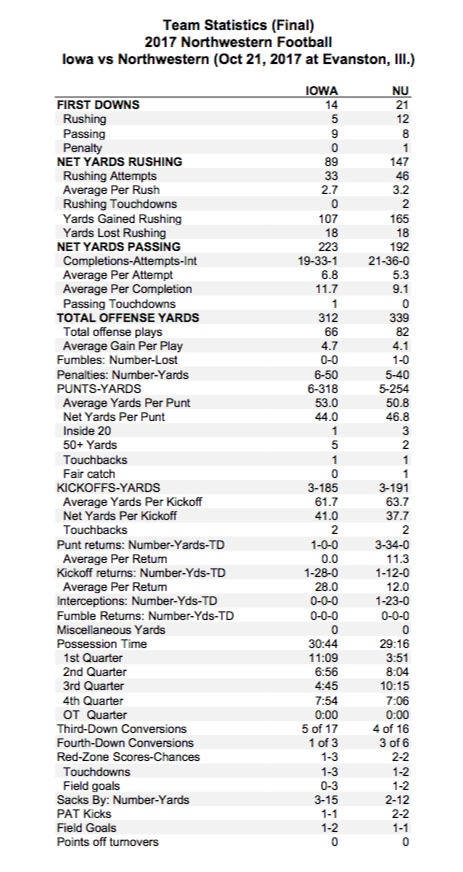