The Iowa – Ohio State Game is in the books. Or should we say the “History Books”. The Hawkeyes overwhelmed the Buckeyes in Iowa City last Saturday in stunning fashion. It’s time to grade that final exam…

Iowa’s Offense was inconsistent and more often than not unproductive much of this season. Against Ohio State – it was nothing short of amazing, dominant, and extremely potent. Iowa wore special alternate uniforms in this game and the performance by the Offense had some wondering who was actually inside those uniforms. But I digress.

Iowa’s Defense set the tone on the very first play of the game – a pick six off Ohio State QB J.T. Barrett. It held the Buckeyes well below its offensive averages in – well – everything: 24 points (46.2 average), 371 yards of total offense (571.2 average), 163 yards rushing (244.4 average), and 208 yards passing (326.9 average). And so forth and so on. This was better than “bend but don’t break” – it was a nearly perfectly executed game plan. But for the goofy, un-called, failed fake punt late in the fourth quarter that immediately led to Ohio State’s last seven points from Iowa’s 22 yard line, the Buckeyes would have lost by 38 instead of “only” 31.

The fake field goal play deep in Buckeyes territory was absolutely brilliant. The “Polecat” saw the holder complete a pass to the long snapper who tripped and fell down on the Ohio State two yard line for a first and goal. I think it’s highly likely that is one of the only, if not the first, time in history a long snapper caught a pass in an actual game.

The only thing that went wrong was P Colten Rastetter taking it on himself to run a fake punt that failed to get the first down from deep in Iowa’s own territory near the end of the game when Iowa already had the win in the bank. Dumb – even stupid. Disrespectful. Totally unnecessary. Couldn’t read Kirk’s lips when he grabbed Rastetter by the collar when he came off the field – but I’m pretty sure it was something along those lines.

There are several possibilities including one of the usual suspects – Linebacker Josey Jewell. But this week’s choice is Defensive Back Joshua Jackson who had a career type of game, elevating his season-long good play into the stratosphere in this contest: three picks off of Buckeyes Star QB J.T. Barrett – one of them a spectacular one-handed grab at the goal line, three solo tackles, and blanket type of coverage in the defensive backfield throughout the game. He was also named Co-Big Ten Defensive Player of the Week. 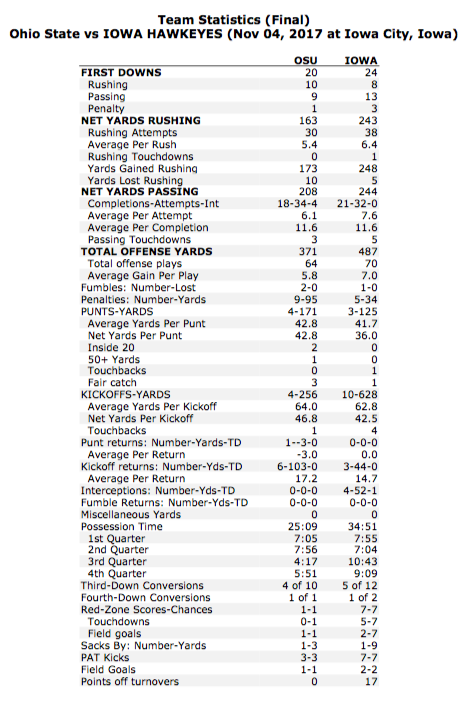