The Iowa – Iowa State Game is in the books. The Hawkeyes prevailed 44-41 in overtime on Jack Trice Field last Saturday. It’s time to grade that final exam…

Scoring 44 points will win you most games; still room for improvement and growth, but hard to complain. Hawkeyes are tied for 1st in the FBS in Red Zone Production.

Key stops but way too leaky; surrendering 41 points will lose you most games.

Kind of a mixed bag – still a work in progress.

Pickings are a bit slim but we’re going with Parker Hesse. His pick and 13 yard return late in the 4th Quarter was critical – Iowa almost certainly doesn’t pull this game out but for that play. He also had a career-high seven tackles.

This choice was easy: OC Brian Ferentz for constructing last week’s Offense. He is growing fast in this position as play-caller, moving away from Iowa’s historical tendencies out of formations (especially compared to Greg Davis), mixed things up, and the game-winning play-call in OT was brilliant. I think it’s safe to say Iowa State never expected that pass with a power-formation and 10 men in the box.

Please remember, as always, these are subjective observations and open to debate and discussion more often or not. Agree or disagree – that’s part of the fun of college football. 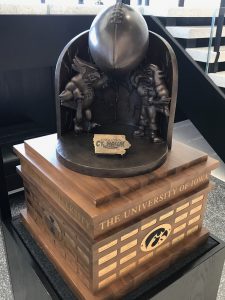 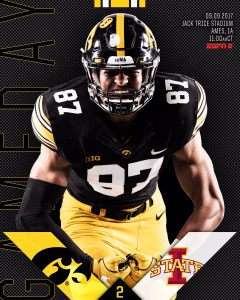