The Iowa – Minnesota Game is in the books. The Hawkeyes play their third 17-10 game of the season but this time it’s a win at Kinnick Stadium last Saturday. And Floyd of Rosedale remains in Iowa City for at least another year. It’s time to grade that final exam…

Iowa’s Offense was better – at least at the start of each half – which is a big improvement. In fact, it was the first time all season the Offense scored on its first drive in each half of a game. It’s just that it couldn’t score otherwise – except for one field goal (which turned out to be pretty important). But something’s better than nothing – especially compared to the debacle at Northwestern. More consistency

Iowa’s Defense did just about everything it needed to do. It held Minnesota and its trio of running backs to 142 yards rushing vs. its season average of 188. And while WR Tyler Johnson finished with 92 yards receiving, 63 of those came on one catch – the only big play Iowa gave up the entire game.

Very cold – and pretty windy. So considering those factors, it was a decent performance.

CB Josh Jackson. He had four PBUs to go along with three tackles and the tipped pass in the end zone that resulted in Gervase’s interception, snuffing out one of the few threats Minnesota had the entire game. He’s getting better by the game and its really turning Iowa’s defensive secondary into a team strength.

Phil Parker again. He’s going to have to build a bigger awards case if this keeps up. 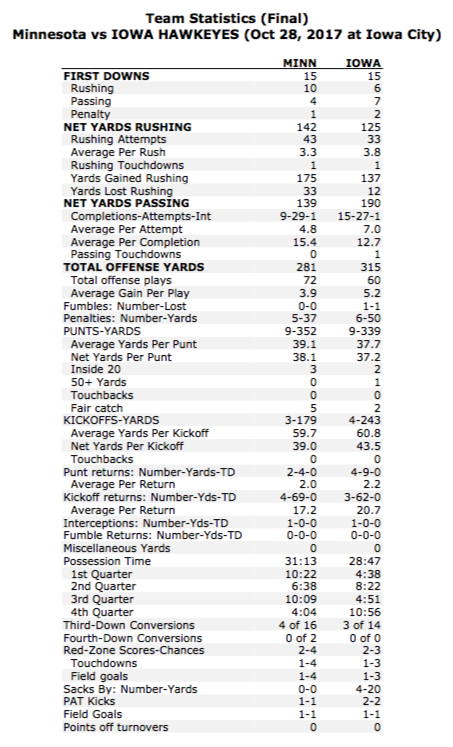