Wisconsin remains undefeated and Iowa’s Offense remains a work in progress. Iowa crushed Ohio State last week with a brilliant and explosive offensive performance that put 55 points on the Kinnick Stadium Scoreboard. This game at Camp Randall Stadium couldn’t have been more of a polar opposite.

Iowa’s only points came off of two pick-sixes by star Cornerback Joshua Jackson – one for 43 yards in the First Quarter on Wisconsin’s first offensive drive and the second for 52 yards early in the Third Quarter.

The Hawkeyes only ran three plays in Badgers territory. The 12 possessions their Offense had finished like this: nine punts, one interception, and two fumbles. Total Offense was an anemic 66 yards – the worst in the Ferentz Era. The previous low was 100 yards vs. Arizona State 13 years ago in 2004. Iowa could only muster 25 net yards running the ball and just 41 passing. The Hawkeyes also had three turnovers – all by QB Nate Stanley: two fumbles (one was an early snap mistake by C James Daniels) plus he threw his fifth interception of the season. The Badgers Defense was relentlessly aggressive – and the results clearly showed it.

The Iowa Defense did what it could with the hand it was dealt (by its own Offense). But at the end of the day the Badgers had racked up 382 yards of total offense – 247 rushing and 135 passing. Wisconsin did have four turnovers: QB Alex Hornibrook was intercepted three times (Jackson’s two and the third by FS Jack Gervase) and RB Jonathon Taylor fumbled once (forced by Jackson, recovered by CB Manny Rugamba). Taylor was every bit as good as advertised and he finished with 157 yards rushing (just slightly above his season average of 152).

The two teams’ sophomore quarterbacks ended up accounting for six of the seven total turnovers combined in this game. Iowa scored 14 points off those while Wisconsin had 21. Stanley’s line looked like this: 8-24-1 for 41 yards – while Hornibrook’s was 11-18-3 for 135 yards. Stanley was sacked four times and Hornibrook twice.

Iowa’s game highlights were few and far between (Jackson’ two picks returned for TDs) – and none of them came via the Hawkeyes Offense. One week you’re on top of the college football world – the next week you’re sucking wind.

Oh, yeah – and Wisconsin retained the Heartland Trophy – and the Badgers have now won 16 of their last trophy games against Iowa, Minnesota, and Nebraska. The Hawkeyes have the chance to retain the Heroes Trophy when they play the Cornhuskers on Black Friday – which would be their third of this season.

There were no apparent answers from the Iowa coaches and players in the post-game locker room. There better be some before the Hawkeyes face Purdue next Saturday at Kinnick Stadium.

This is the first time in the last seven games in this series that the home team won.

CB Josh Jackson was in on three takeaways today. He finished the game with three tackles, two INT, two TDs, one PBU and one FF.

FS Jake Gervase had an interception, his second of the season (Minnesota).

Wisconsin’s win snapped a six-game winning streak by the visiting team in the series.

Iowa’s loss was its first this season by more than one possession.

The Hawkeyes fell to 2-1 in trophy games this season. Iowa successfully defended two rivalry trophies, winning at Iowa State, 44-41 (OT,) to retain the Cy-Hawk trophy, and topping Minnesota, 17-10, to retain Floyd of Rosedale. Iowa will defend the Heroes Trophy on Nov. 24 at Nebraska. 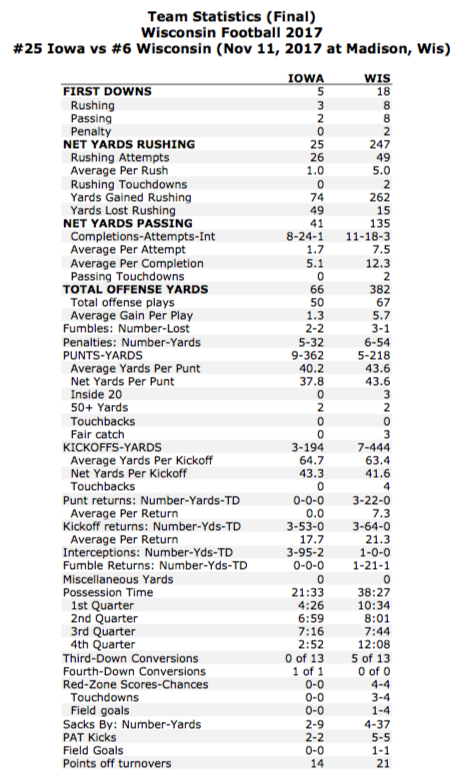 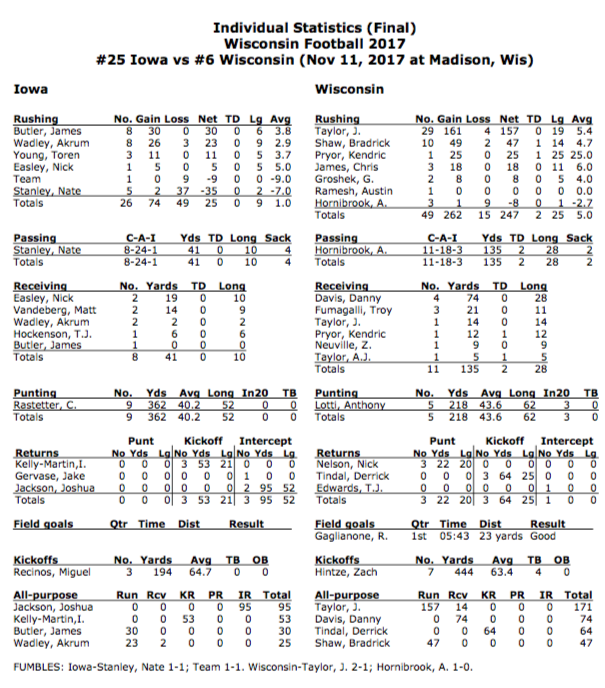 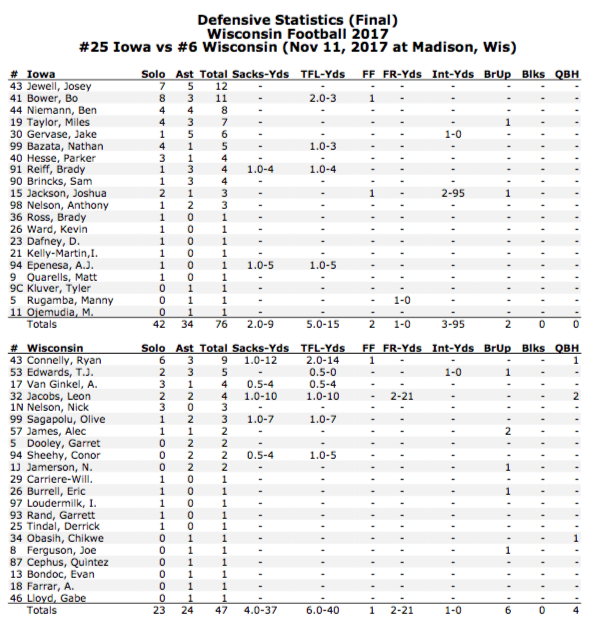